Keep a look out for me, I'll be at Herschel Girls' School tomorrow, Woodstock library next week Tues and Wynberg International School on 8 April!  Yes, talks can be arranged at your school.  The author, Heidi, will tell you all about me and what I get up to and show you some interesting goodies.  Contact Heidi at abby@telkomsa.net if you'd like to book her for an event at your school (teachers and parents to contact please).  Heidi also takes me to birthday parties if you'd like to do crafty things with a sea theme.

Enough of that though, I want to tell you about what happened at the aquarium this week.  It was Pirate Week! 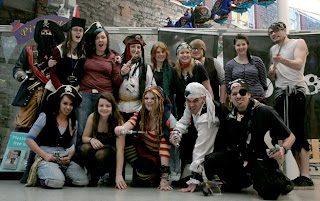 As you can see, the staff all got dressed up as crew of the pirate ship - quite funny really, especially seeing as the penguins took to pulling at the outfits and stealing one of the aquarists' swords!  He really shouldn't have taken it into the enclosure with him but I guess he's learnt now not to take unnecessary loose items in with him.  The animals weren't only stealing OUR things, but the public's too!  The catfish managed to swallow a pair of glasses!  Someone was leaning over the tank and they fell in, so Bobcat (the catfish) promptly swam over and swallowed them thinking that they were food.  A hysterical volunteer came running up to me to tell me about it, but luckily another aquarist had seen it happen and reacted quickly.  A little bit of net movement in the water made Bobcat spit the glasses out - shew!  Please do me a favour - if you're in an aquarium, make sure that you don't wear your glasses on your head, don't put your hands in the water and don't drop or throw things in the water....and PLEASE don't bang on the windows.  We also had a few excited members of the public bashing the otter window to get them to wake up.  It's not nice to disturb the animals... AND they scratched the window with their jewellery.

So it was an eventful week once again.  Oh yes, a weird looking animal came in today too...I'll let you know what it is next time.

Cockroaches of the sea

Yes, believe it or not, there is something living in our oceans that is very similar to a cockroach.  Anyone scared of cockroaches?  Well, the ocean cockroaches can get bigger than 200kg!!!  How's that for scary?!
Want to know what I'm talking about?.....Nomura's jellyfish!

These guys seem to be taking over the oceans and the possible reasons that the scientists give are:
Overfishing; Declining water quality (yucky water); and Rising sea temperatures (warmer water).

In the Sea of Japan, the numbers of these jellyfish have suddenly increased more than ever.  Since 2002, the Nomura Jellyfish population has exploded SIX times!! In 2005, as many as 20 billion jellies filled the Sea of Japan, causing losses in the fishing industry.

Predators, like many fish and turtles, eat jellyfish, but jellyfish eat fish eggs and sometimes fish too.  So if too many fish are taken out of the sea by humans, jellyfish can take their place in the food chain and take over (Jellies and many fish eat the same thing - plankton).
These jellies can also live in water with lowered oxygen levels, which most fish can't (fishies need to breathe!).  Increased temperatures and nutrient (food for plankton) levels cause lower oxygen levels.  Increased nutrient levels also mean increased food for the jellies.  So it looks like right now, with global warming and nutrient run-off from the land into the sea, we could be in trouble...Nomura jelly trouble.

There are several thousands of species of jellyfish, but these Nomura jellies are the ones who cause a problem - they reproduce like mad, grow fast, eat almost anything and can swim around in yucky water which most fish can't do.  This is why they are like cockroaches!

It's possible that nature will sort itself out and the jellyfish populations will become a normal size again (other jellyfish have been through this before), but we don't know so it's actually quite scary.  Let's hold thumbs that the scientists find out soon.

[Info taken from an article by Richard Stone in the CORAL Magazine]
PS. Do you know that jellyfish eat Sea Monkeys? : )

It's been a scorcher the last few days, our air conditioning in the aquarium has had to work overtime!!  Not to mention the chillers for the tanks!  Well, I hope you're all doing well and getting ready to read about my next adventures because Book II is coming out this month.

Publishing books is an expensive exercise and I'm always looking for companies who are willing to sponsor a print run or part thereof so that I can keep the price of the book at a decent level. New Era joined me on this next book as a part sponsor because they believe in Marine Education.  Check out their website (http://www.new-era-aquaculture.com/home.html) if you're looking for good fish food!

Speaking of hot days and wanting to cool down, have you ever wondered what it's like to be the opposite: an animal who has to live in ice and snow?  Well, if you'd like to know how marine mammals are adapted to the cold, try this:
Can you feel a difference?  Amazing what fat can do to keep you warm, right?  Blubber is a layer of fat that marine mammals, like seals, have under their skin to keep them warm.

So on a beautiful hot day, appreciate that you don't have that layer of blubber but on the cold days...hmmm, you'll just have to add more layers!