That means “hello” or “welcome” in the language of the local Gumbaynggirr Aboriginal people on the Coffs Coast.

I have had a blast with the animals and trainers here at Dolphin Marine Magic! I got to see everything that they do in their job taking care of the animals, including all the fun jobs … and some of the less fun jobs!

At Dolphin Marine Magic, they want guests to experience, discover and then act to help save our planet! So one of the first things on my To Do List was getting kissed by the Indo-Pacific Bottlenose Dolphins and Australian Sea Lions!


Throughout the day, the marine mammal trainers will do training sessions with the animals. The training sessions are really fun and positive for the animals, so they get really excited for training time! The trainers use different tools, including something called a target (which looks like a big matchstick). The animals are taught to touch different body parts to the target. By training this way, they can show the animals what they would like them to do. I helped them do some target training with Ozzie, their biggest male Australian Sea Lion at the park! (and boy was he big!  I could have been his snack...luckily he prefers fish :)) 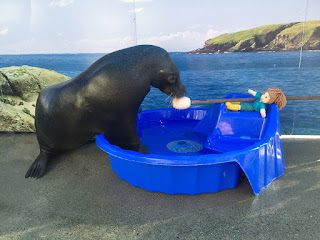 One of the main jobs of the marine mammal trainers is to monitor (keep an eye on/check) the health of the animals that they take care of. This is done by doing a daily health examination on all the animals. This includes checking all over the body for any cuts, scratches or injuries, checking eyes, teeth, gums, body condition and behaviour.

The animals are also given lots of toys throughout the day as part of their environmental enrichment program (in other words, they are kept from getting bored). Some of the toys are things such as balls, chew ropes, food puzzles, buoys, ice blocks and even unique objects that their trainers have dreamt up! I got to help prepare some ice blocks for the animals. 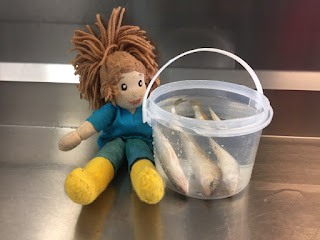 My timing was perfect because I got to join in with Zippy’s 29th birthday celebrations! We celebrated this in style: a big birthday party where all the park visitors were invited, with a big fish cake and Zippy’s favourite toy, his football! 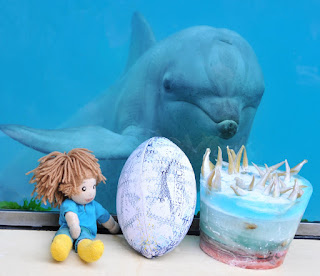 Dolphin Marine Magic is also a temporary home for many rescued animals. Throughout the year, the staff and vets help to rescue, rehabilitate (fix them up) and release around 100 animals each year. This includes whales, dolphins, seals, sea lions, turtles, fish, sharks, penguins and seabirds. One of the Animal Care Staff, Isaiah, asked me to help him attach a temporary tag to one of the rescue turtles so that they can identify and monitor its health while it is in their care. 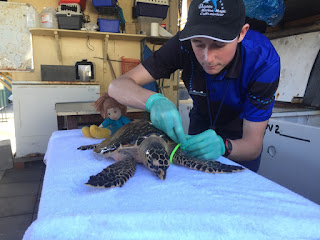 During a presentation by one of the guides, I learnt two things:
1- Visitors to the centre are encouraged to keep their pet dogs and cats inside at night time to protect native wildlife such as the Little Blue Penguins.
2 - It was penguin breeding season! I got to help prepare some nesting materials for the penguins to build a nest to lay their eggs and help check inside their burrows each day to look for eggs and newly hatched chicks. 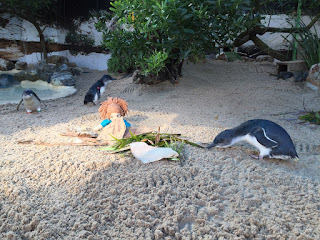 Along with all the really unusual stuff, I also got to do some of the day-to-day stuff like cleaning the reef aquarium and feeding the fish sharks and rays. The aquarium displays the animals which can be found in the Solitary Islands Marine Park just off the Coffs Coast. It extends for 75km (46 and a half miles) and is unique as it is the meeting place for temperate waters from the south and warm tropical waters from the north (A meeting place for two different temperatures of water - very much like Cape Town, where I'm from). This results in a high diversity of habitats and animals (lots of different animal homes and animals) in the Marine Park. While fishing is allowed in the Marine Park, it is important to make sure that you don't catch fish that are too small and that you don't catch too many (there are limits for each species) to make sure there are plenty of fish and animals left for future generations to enjoy.
So, like I said before, there's normal stuff to do each day too. Being a marine mammal trainer isn’t a completely glamorous job. I woke up at 6 AM to help prepare all the animals’ food for the day! 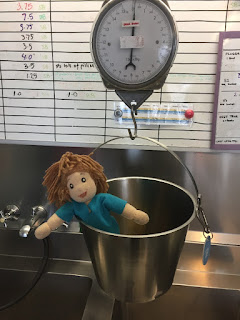 I had to sort through almost 100 kilograms of fish to select the best ones for the animals to eat. Each of the animals has a diet tailored for their specific needs. Afterwards, I scrubbed down the entire fish kitchen till it sparkled!

There is also a lot of work that goes into making sure the water in the animals’ pools is nice and clean. The water is tested up to four times a day to make sure it is clean. The tests include monitoring important chemical levels such as pH, temperature, chlorine, salinity and dissolved oxygen. I helped out in the lab ... no white lab coat needed :) 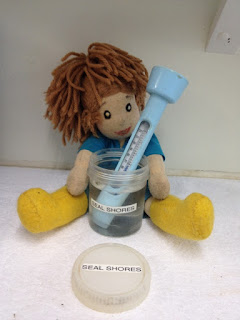 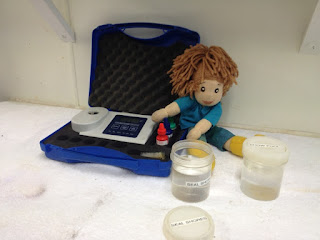 Dolphin Marine Magic and Zoos Victoria not only look after the animals in their care, but also the wildlife outside their walls!  They started a program called “Seal the Loop”. This program encourages members of the community to throw used and discarded (left around because it can't be used anymore) fishing line into the Seal the Loop bins to ensure animals do not swallow or become entangled in it.
Apparently, Calamity, one of Dolphin Marine Magic's rescued dolphins, came to them because of being entangled in a fishing line.  The staff are super keen to make sure that doesn't happen to any other animals! They've set up 27 bins in the Coffs Harbour region. Along with volunteers, staff regularly collect the fishing line in these bins. It's quite amazing, they've collected over 60 km (37 miles) of fishing line since the project started in Coffs Harbour! (That's about 600 soccer fields long - Shew!!)

After all the serious stuff, I also got to do some sightseeing around the Coffs Harbour area. One of the “must dos” is to visit the Big Banana! Australia is famous for its many big things, such as the Big Prawn, the Big Pineapple and the Big Merino. The Big Banana is one of Australia’s original and first big things!

So that's Australia done.  Follow me and I will take you to more exotic places.  Where will I go next?  Can you guess?