Acid in the ocean...in Alaska? 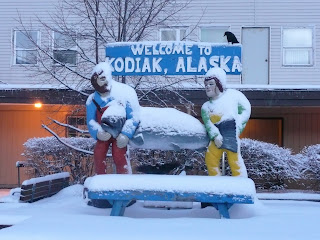 It's been snowing so much here with temperatures of -10 °C - good thing Switgard sorted me out with a scarf and jacket, otherwise I would have frozen!

I have to admit, it hasn't just been all work and no play, I got to go cross-country skiing (my first time!) to check out the snowy landscape, frosted trees, frozen lakes, and I even saw some deer.

After an afternoon out skiing there’s nothing better than a cup of hot cocoa while huddled down under a blanket on the couch, so that's just what I did!

After all the fun and games, we went down to the Kodiak Fisheries Research Center to check out the touch tank and meet Dr. Foy, the director of the Kodiak Laboratory of the Alaska Fisheries Science Center, NMFS.
At the touch tank I saw big Christmas and pink sea anemones, California sea cucumbers, a range of different species of sea stars, Hermit Crabs, a Box Crab, a red King Crab, some feather duster tubeworms, a large Gumboot Chiton, and a few scallops. Everything in Alaska seems so big!
I liked the curious black rockfish, the big cod and the red sea urchin. 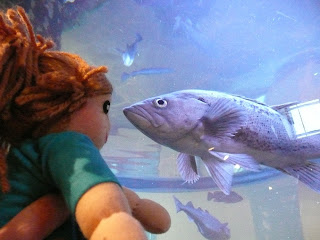 I also got face to face with a hairy crab almost as big as me and you know what? ...The biggest sea stars in the world live here: Sunflower sea stars. There are some in the aquarium with over 30 arms and each arm is as long as my whole body!

After getting a feeling for the place, Switgard said that I was ready for the kids... so the next day it was time to join the students of Kodiak Middle School sixth grade in the Ocean Science Discovery Lab for a class introducing ocean acidification.  First, Switgard talked about how people and animals breathe in oxygen (O2) and breathe out carbon dioxide (CO2), and the plants take up carbon dioxide and use the carbon for their growth and release the oxygen back into the air. 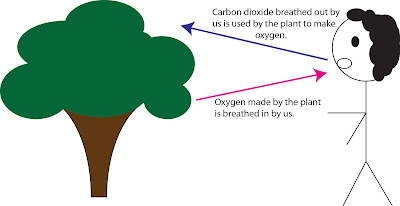 Then, they talked about how every time we burn something (wood, coal, oil, fuel), what you end up with, called the product, contains a lot of CO2. Over the last 200 years people have invented cars, buses, trucks, boats without sails, airplanes and lots of stuff, which all takes a lot of energy to make and run. Also, our houses and public buildings are heated with oil. All that has put more and more and more CO2 into the atmosphere; in fact, there is more CO2 in the layer around our planet now than there ever has been since there were humans!

Most of our planet is covered with ocean (about 75% of the surface of planet Earth is water) and over 30% of all that CO2 we have been producing has dissolved into the oceans. For a long time we thought that the ocean was helping us, but now researchers have found that CO2 dissolving into the ocean is changing the ocean chemistry - not good news!

Chemistry seems like a fancy subject for really brainy people, but Switgard makes it easy to understand by teaching the students how to build molecules (Which is what everything is made up of. Water is made up of water and hydrogen molecules!)
The most difficult problem was trying to figure out how the CO2 would dissolve into water. There are a few solutions to this problem, but nature's way is to form a carbonic acid molecule. An acid is something that has a pH measurement below 7, seawater is on average about pH 8.1, so it’s not an acid at all. Ocean acidification means that the ocean water’s average pH becomes more acidic (the pH gets a little lower).


The problem is, that the carbonic acid easily falls apart and then competes with all the shell-building animals for calcium in the water. (Calcium is what makes our bones hard and what animals with an outside skeleton use to build their shells).
For crabs, mussels, clams, chitons, sea urchins, sea stars, coral, oysters, and many other animals it will get more difficult to build their shells the more CO2 is dissolved into the ocean. One of the main areas of research at the Kodiak Laboratory is to look at the effect of ocean acidification on the development of King Crab when they grow from an egg to a larva and into small crab.


After this explanation, Switgard got out a flask of seawater and some blue dye. She gave every group a beaker of the blue seawater and a pH meter. She explained how to use the pH meter and the students then measured the pH in their beaker of seawater.

Then, they used straws and blew bubbles into the seawater - how fun. Some boys made a mess! 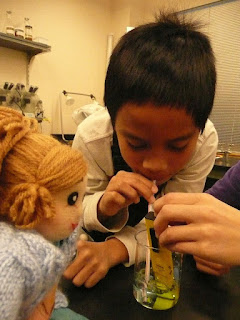 After a while, the blue color disappeared, instead the water turned kind of yellowish. Another measurement with the pH meter showed that the pH was lower now. What had happened was that by blowing into the water they added CO2 to seawater and produced carbonic acid - just like ocean acidification!

So much informationin one day, but so much fun!

The next day, it was time for the grade 7's.  They had a different project to do...they exposed young oysters to 3 different pH levels and then measured the effect on oyster growth.

Along the Pacific Coast from Oregon to Alaska oyster farmers have seen strange things in the last 6 years. Sometimes, when they have just set up their tanks with oyster spat (little oysters that just changed from a larva and settled to the bottom), they would watch them disappear overnight. When scientists helped look into the problem they found that the oyster disappearances were connected to offshore winds. When the wind blows offshore, it pushes the water away from the shore and is then replaced by water from deeper layers of the ocean.  This water that comes up along the Pacific coast is water that has not been at the surface for a thousand years and it has a lower pH than any surface water. This means that when it makes its way into the oyster farms it dissolves the newly formed shells of the oyster spat. Shame!

Thanks to Switgard and all my new friends I made in Kodiak, I had soooooooooooo much fun! If you want to learn more, Sea Fans, why not visit the Kodiak lab and see for yourself what amazing work they do there...you may even get to see the teeny tiny crab I was holding. : )

Have a great week Sea Fans and a fantastic Christmas.
Chat soon.
Cheers

I know you've all been waiting patiently to hear from me and yes, with internet I should be able to get to writing as soon as I've done things, but I've been so busy that I've hardly had 2 seconds.  Don't worry, you get to see all the fun stuff I've been up to, just read on.....

I've just left the Alaska Sea Life Centre in Seward and what fun we had!  I knew it was cold there, but wow, it can be FREEZING!   I don't know how those guys dive in that water every day.  Anyway, I'm getting ahead of myself, I need to start at the beginning.

Casey was nice enough to invite me to come and visit them and she made sure that I got to help out in ALL their animal departments - marine mammals, avian (birds) and in the aquarium.

In the aquarium, I met Jared, the Aquarium Co-ordinator who invited me to help him feed the octopus.  Not just any octopus, mind you, I got to feed the Giant Pacific Octopus called Lulu.

Lulu is four years old and loves razor clams.  We had so much fun, I felt like staying with her all day. ﻿
Some interesting stuff:

After visiting Lulu, I spent a little bit of time with the front of  house staff at the touch pool where they had some really pretty starfish/sea stars.

You can't work in an aquarium and not get wet, so after seeing the front of house, I got to dive in the deepest sea bird exhibit in North America!  My dive buddies introduced me to Big Mamma, a wolf eel, and then we got down to the serious work of scrubbing.  After all, everything's got to be clean and it's not going to get that way by itself! : )

To defrost from the long dive, I went over to Assistant Curator, Cade, to see if I could meet the Pacific Harbor Seals. I was in for a treat: he was just about to start a training session with Snapper, their 27 year old Harbor Seal.
After seeing Snapper, I got to meet Tongass, Snapper's son.  They're such beautiful animals and amazingly elegant when they swim in the water.  Like all good trainers, after the fun and games, I went and got my hands dirty.

I ended my time at the Alaska SeaLife Center in the seabird aviary, home to 10 different types of Alaskan seabirds. Along with Educator Callie and AmeriCorps Member Sara Ann, I got to hand feed a range of different birds.
I got to meet a real life Puffin and a Kittiwake.  A Kitti - what - e, you ask?  A KITTI-WA-KE, it's a type of gull and it's very pretty: it looks a bit like it's had it's wings dipped in ink.


All in all, I had a great time at the Alaska SeaLife Center and I loved meeting all the staff who work there and get to spend every day of their lives around amazing marine animals.  If you'd like to find out more about the Alaska Sea Life Centre, go to http://www.alaskasealife.org/ or better yet, if you're in Alaska for Christmas, why not pop over to the centre and see it all for yourself!

Thanks ASLC staff, I had a great time and thanks so much for my standard issue Grunden wear, the overalls (as we call them) are great!


www.alaskasealife.org
Posted by Abby at 12:38 PM No comments: 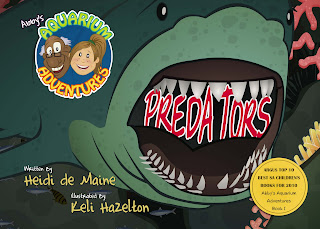 I hope you've all stocked up for Christmas! : )
If not, Heidi will be at Kirstenbosch Market with craft kits and my books for sale this Sunday from 9am to 3pm....go and have a look, it's a great market!

What not to do when you're diving!

Diving is a great sport and it's the best way to see some of the most amazing creatures on this planet.  The only problem is that some people don't respect the underwater world, before, during or after diving!

I've been lucky enough to dive in quite a few beautiful places around the world and so often, I see traces of us humans disrespecting nature.  From pollution to broken coral.  It's really sad and if we don't do something about it, who will?  So please Sea Fans, when you dive please:
Lots of people don't realise that they are damaging anything because they're so busy looking at the beautiful underwater world that they don't feel their fin scrape over a reef.  Make sure you have good buoyancy control before swimming over reefs and through overhangs and caves!

Thanks Sea Fans, this will make a huge difference if you can all stick to this and make sure your friends and family stick to these rules too.