Teaching about a school of fish

I hope the week is treating you all well.  I'm travelling again and having a ball!  I'll post all about that soon but in the mean time, I thought I'd give you some more info on another type of marine job, an Informal Education Manager at an aquarium.  I spoke to Michelle Moodley to find out more: 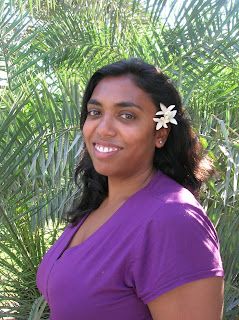 1.       What is your job? Informal Education Manager. I'm basically in charge of the experience in the aquarium for public guests, this covers the signage and the permanent education staff who work with guests daily.
2.       What did you study/do to get this kind of work? I started working as one of the permanent education staff on the floor, working with the public everyday, then worked overseas as an Education and Events Manager and then returned to South Africa in my current job.
3.       What do you do in a normal day? I manage staff logistics, which means that I do staff training, schedules and assessments.  I also prepare new signage or modify exisiting signage (basic research and design layout).
4.       What is the most interesting thing you've come across/experienced in your job? Working overseas for 2 years and gaining more experience in a newly built facility.
5.       What is a not-so-nice thing about your job? Having to attend so many meetings!
6.       What do you love about your job? A great moment like today -spending the morning at Umdhloti rock pools training staff.  We even found an octopus!!!
7.       What would you say/recommend to kids who want to do what you do? Be a good example and with signage, learn to think laterally and hang in there, it can get discouraging doing the same thing over and over again, but it's worth it in the end when you see the end product and people enjoy reading what you've written.
8.       Anything else? Learn new languages all the time.  You can take languages with you everywhere you go and you don't need a bag to pack it in!

Thanks Michelle!  So Sea Fans, I hope you've learnt something interesting today - how exciting to be a
teacher and you don't need to be in a school, you get to see fish all day long!

My last post was going to be really long so I thought I'd cut it short and continue today.  Cordova was where I went to the Prince William Sound Science Centre and I got to see a snowpocalypse (http://abcnews.go.com/blogs/headlines/2012/01/snowpocalypse-2012-for-small-alaskan-town/), I got to learn about the Copper River Watershed and glaciers and I got to meet the Urchin Queens and the Nefarious Dawgsharks.

I also got to go to the Oil Spill Recovery Institute (OSRI) where I learnt more about the Exxon Valdez Oil Spill and what the OSRI does to manage oil spills.

This actually reminded me of the Treasure Oil Spill in in 2000 and of SANCCOB who helped those poor penguins that got oiled.  (See the SANCCOB website for more: http://www.sanccob.co.za/?m=2&s=5).

Anyway, back to Cordova...I got to do such cool stuff in the lab at the Science Centre, have a look:

A fluorometer is a piece of equipment that measures fluorescence which is the light emitted during absorption of radiation of some other wavelength (a light shines onto the substance in the test tube and then this causes molecules of certain compounds to light up so that they can be counted).


A spectrophotometer is a piece of equipment used to measure light intensity (strength).

The Science Centre also runs a marine technology programme where students learn about oil spills and then get to build and operate a Remotely Operated Vehicle () to "respond" to a mock oil spill. These kits also get sent out to teachers around so that they can show them to their kids AND the teachers can even do training courses - how cool is that?!  I wish we got ROV kits in !

(Since my visit, Kara tells me that she's taking the ROVs to the Science Bowl for the Tsunami Bowl competition where there'll be a 20-team challenge.  Students will work in teams and compete in 5 groups at a time to complete an obstacle course).

I was also lucky enough to get to go to the Alaska Marine Science Symposium in .


The most fun was the Iceworm Festival though! This zany mid-winter festival celebrates the emergence (appearance) of the ice worm in , where the winters are long and dark and give rise to thoughts of things like ice worms. The highlight of the three-day festival is the parade of a 150-foot-long ice worm (it has a dragon's head) followed by 500 or so paraders. Other events include variety shows, ski events, a survival-suit race, a beauty pageant, music, and dances.

The celebration began in 1961 as a way to shake off the winter blahs, and the legend was born then that an ice worm hibernates during the winter in the glaciers but starts to hatch or wake up in early February. The worm has gained international fame, and the festival draws great crowds of people.

As you can see, was a blast!!  We had so much fun and I can't believe my time here has come and gone but I guess it's OFF TO A NEW ADURE!  Thanks for having me Kara, look me up if you ever go down south.

Have a great week Sea Fans and I'll see you soon with stories from .
Cheers
Abby
}( *)8

I'm back in the US and have lots to tell you.  Ever heard of Cordova?  Well, I hadn't until Kara Johnson, from the Prince William Sound Science Centre, got a hold of me and invited me to come and stay with her for a few days.  Boy am I glad I said yes!!  I learnt so much in such a short time.

The first thing that Kara taught me about was the Copper River Watershed.  This is an important waterway that supports the world-famous Copper River red salmon runs.
Each year 2–3 million Sockeye, Chinook, and Coho salmon return to the system, with over half being harvested by the commercial gillnet fishery at the mouth of the river. The fishery averages $40 million/year!!!!  Subsistence (fish taken for survival) and sport fishermen (those who fish for fun) on the upper river harvest over 200,000 salmon each year, with values estimated at between $3 and $5 million, a critical contribution (input) to the upriver economy (the financial system of the area...money money money!) and culture (way of life).


Some other interesting facts about the watershed:


While I was in Alaska, I got to experience Snowpocalypse 2012!  Never heard of it?  Well, neither had I until Kara told me to look outside:
Snowpocalypse means - A weather condition in which the amount of fallen snow, while not really such a big deal, wreaks havoc on a city, effectively shutting it down and leaving its citizens stunned and unable to see any sign of hope or a return to normalcy. (Urban Dictionary)
While I was at the Science Centre, I got to learn about glaciers: how they form, how they melt and how they produce silt (muddy deposit).
I also got to sit in on a practice session with the guys and girls entering the National Ocean Sciences Bowl.

The Sciences Bowl (http://www.nosb.org/) is a nationally recognized high school academic competition where talented students can test their knowledge of the marine sciences. This competition was created in 1998 in honor of the International Year of the Ocean and since then, the competition has grown to include  300 schools with over 2,000 students taking part each year. The regional competition is called the Tsunami Bowl and Cordova (where the Science Centre is) has been participating since 2002 with Prince William Sound Science Centre educators (teachers) working as the coaches. This year they have two teams, a junior team called the Urchin Queens and a senior team called the Nefarious Dawgsharks. The Tsunami Bowl will be held at the beginning of March and the winners go to the national competition to be held in later in the spring.