I went with Bella to the Lewes Railway Land Nature Reserve to help with a National Insect Day Event. 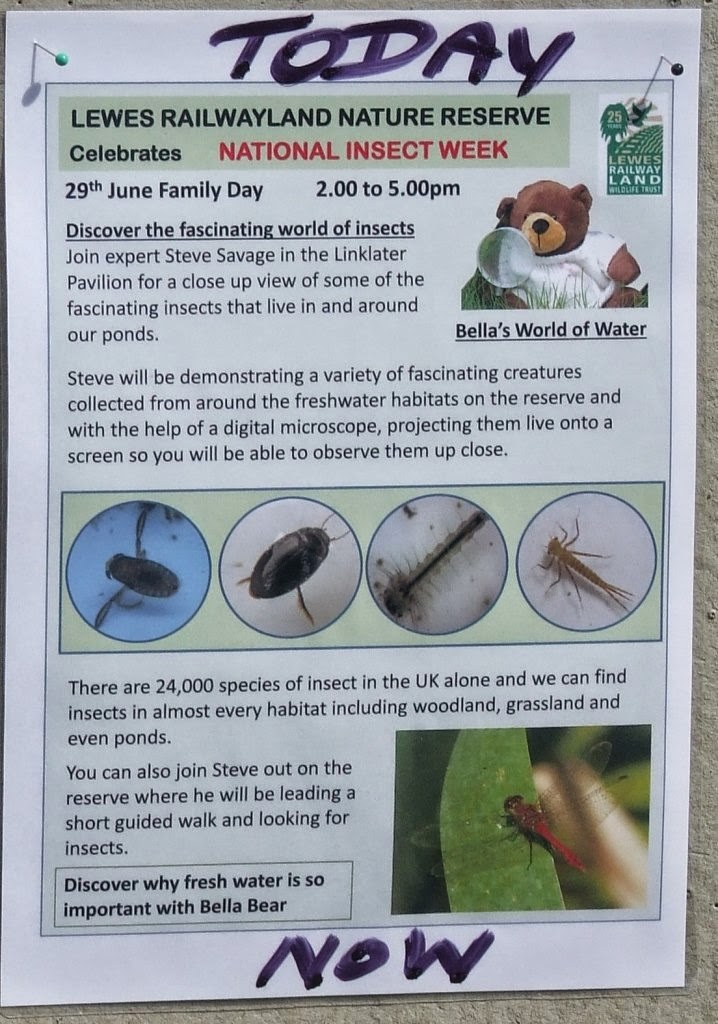 It’s called ‘railway land’ because the land was once part of the railway sidings next to the river. When fewer goods were transported by rail, the sidings were not needed any more. The land was going to be built on but it was rescued and turned into a nature reserve with woodland, ponds, ditches and other habitats. Bella works here at the reserve for part of the time.

For a while we sat by the Winterbourne stream, 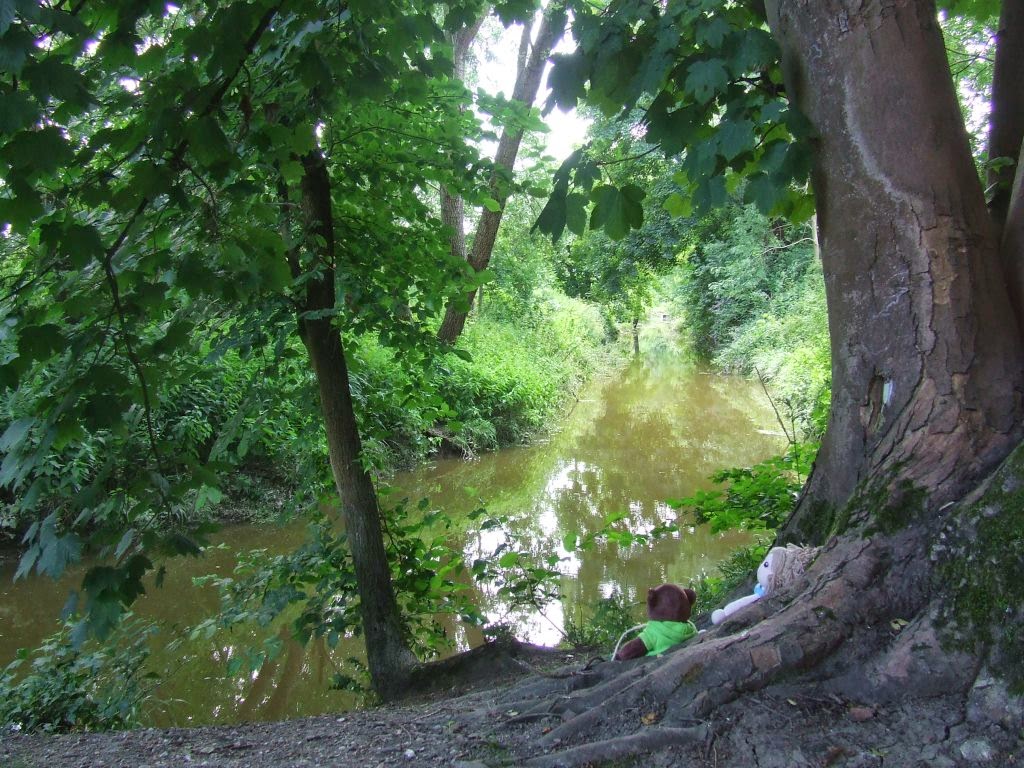 which is quite low in the summer but the level is much higher in the winter. As we sat and looked up the stream a mother Mallard duck swam past with its chicks. 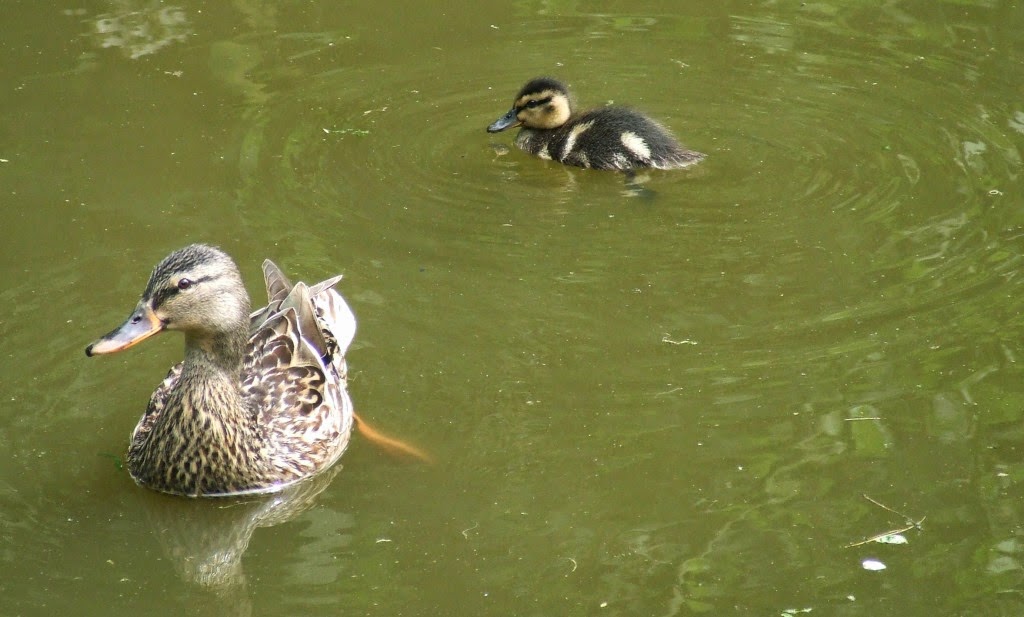 We had work to do, so we moved on to the peaceful pond in the wood
where we would catch some pond animals and then take them back to the centre.
Bella said we could help Steve show people the pond animals through a microscope that was attached to a lap top and a projector.  The focus was to be on ponds as many of the animals that live in ponds are insects or insect larva.
We did catch a few other animals to show including a stickleback fish. 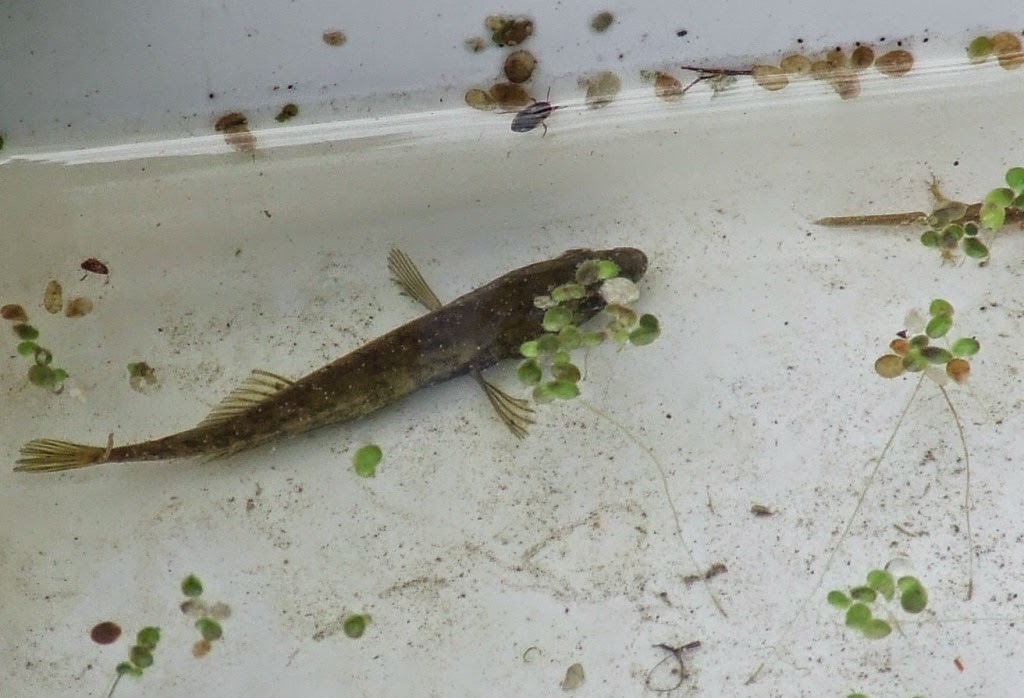 Bella said that there were eels in the pond and when they were adults they would swim out to the ocean to lay their eggs.

Inside the centre we helped Steve demonstrate the live animals, people had lots of questions. 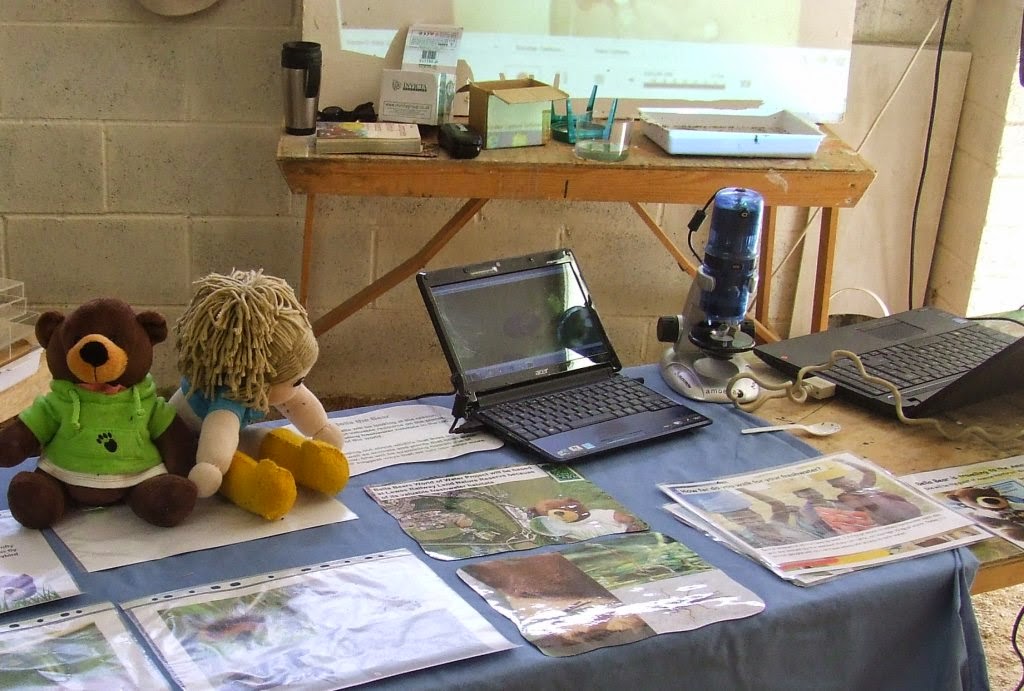 Steve explained that many of the animals were insects that breathe air. Some of the animals had breathing tubes which they use like a snorkel at the surface of the pond. Some have gills like fish and others take a bubble of air down with them to use like an aqua-lung (SCUBA diving gear).

People could also see Bella’s display about how freshwater is the most important substance on the planet. The display showed how it is important in nature but also how we all use water and how some people waste it. Bella has also been finding out about parts of the world where drinking water is scarce and people have to walk a long way just for a little water (hmmm...good timing that a South African should visit.  In Africa, there are soooooooooooo many people who don't have running water and they walk miles to get a bucket of water which is used for cooking, bathing and washing).


Bella will soon be travelling to the Amazon Rainforest to find out about this amazing place and also how water is important there too.   I wonder if there's a chance that I could go to the Amazon one day...hmmmmmm.

Thanks so much Bella and Steve, I had fun.

I've done so much with Ed the Bear and he keeps showing me more...it's unbelievable what he gets up to!  And people of all ages get to experience it with him.

At the beginning of July, we attended the Big Bang South East Stem Science Event. 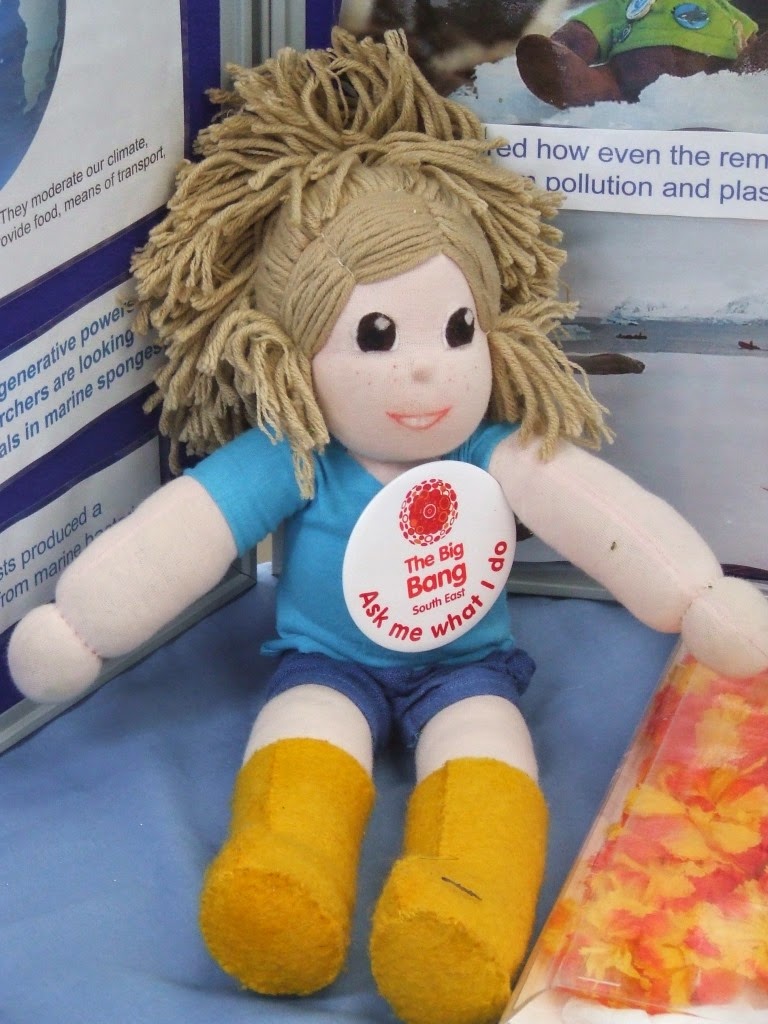 This year they were expecting 4000 teachers and children!  The event shows children lots of different aspects of science, technology, engineering and mathematics and the aim is also to get children interested in a science career when they leave school or university.

I helped with the stand; 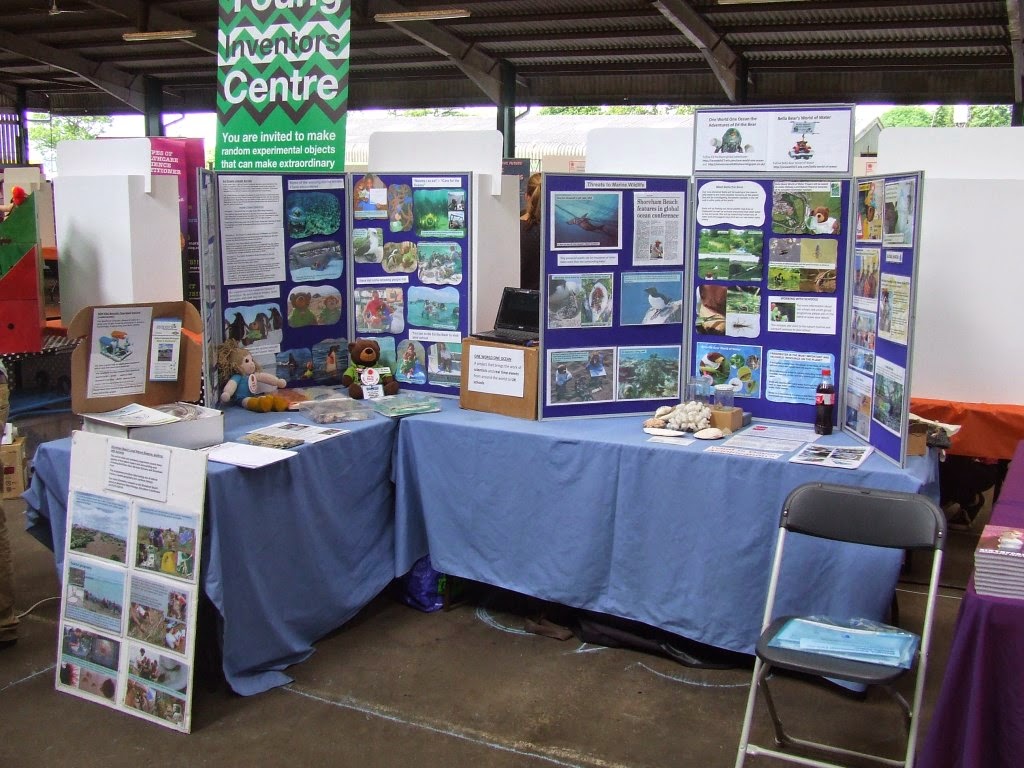 we all wore badges encouraging children to ask us a question. We had lots of information about the science of the oceans, how it creates our climate, provides oxygen, food, freshwater and many other things too, including new medicines.
We also had information about the damage we are doing to the oceans.  Did you know that so far we have only explored 5% of the oceans?!?!? There are so many careers that can help us understand the marine world better: studying marine animals and habitats, oceanography, designing undersea crafts and/or equipment to help us explore the oceans, finding new medicines, or studying how we are damaging the ocean so that we can help repair the damage.

There were lots of questions and the children were very interested to hear about the oceans.  Steve and Ed also spoke about a new project they were hoping to get secondary schools (11-18 year olds) interested in. This is based around a model ROV (remote operated vehicle) that the children can build and then design it to do something.
This might be to add a webcam and film underwater, it might be to add equipment that takes the temperature of the ocean or collect other information. They are hoping that this could be a good way to get secondary schools to learn more about the oceans.

There were lots of other exhibitors, some had experiments, and others had activities or other information such as Bio care – finding medicines in the ocean, 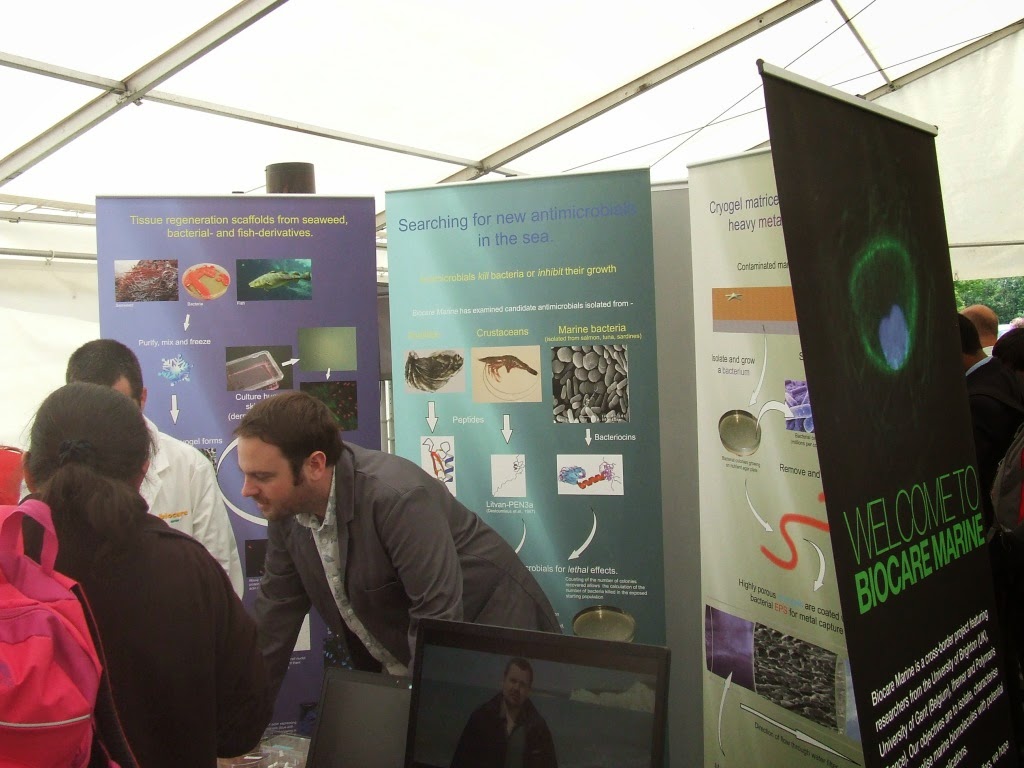 a wave experiment.
Schools also had exhibits, including a model about renewable energy 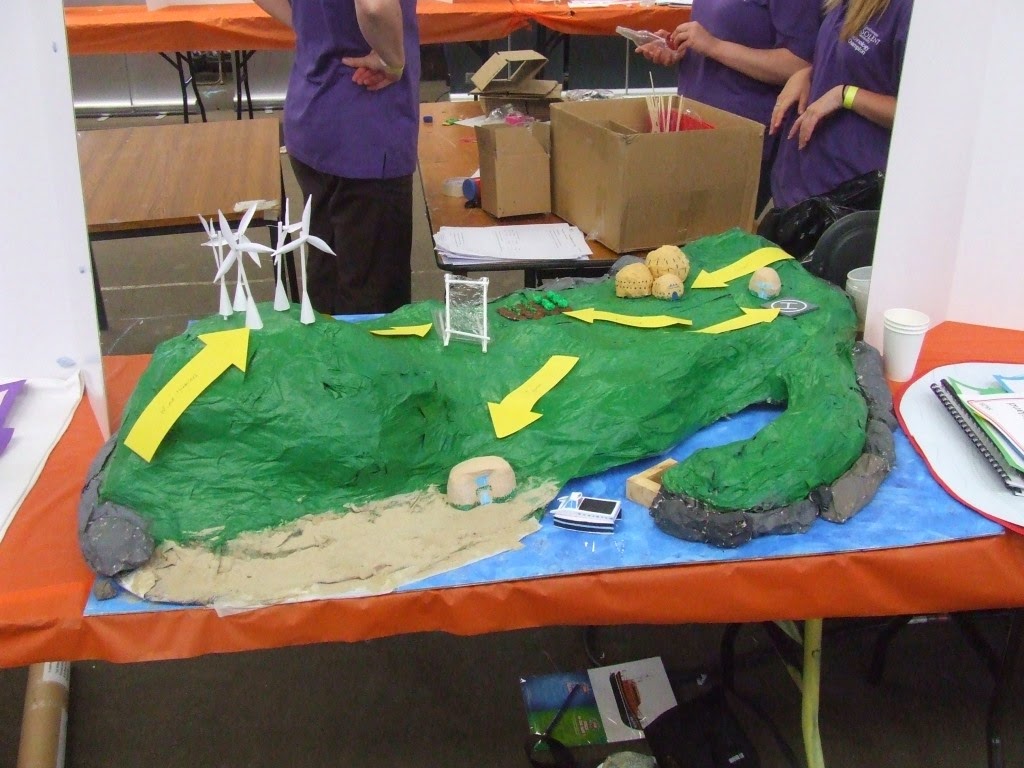