I thought I should just quickly share this with you seeing as I visited Michael a while ago whilst on my world travel adventure:

Go and have a look.
Have a great weekend Sea Fans!

Now if you thought I was having fun before, just wait, there's more...with Mr and Mrs Fish (www.mrandmrsfish.com)!  Yup, that's what they are called at Fish Camp on the campus of Southern Maine Community College in South Portland, Maine.

The Fish campers and I got on really well and HAD A BALL using costumes to show life as it is in the sea! I taught about clams, tide pool life and fish characteristics and the kids became the lessons.  Sounds odd? Well, have a look... 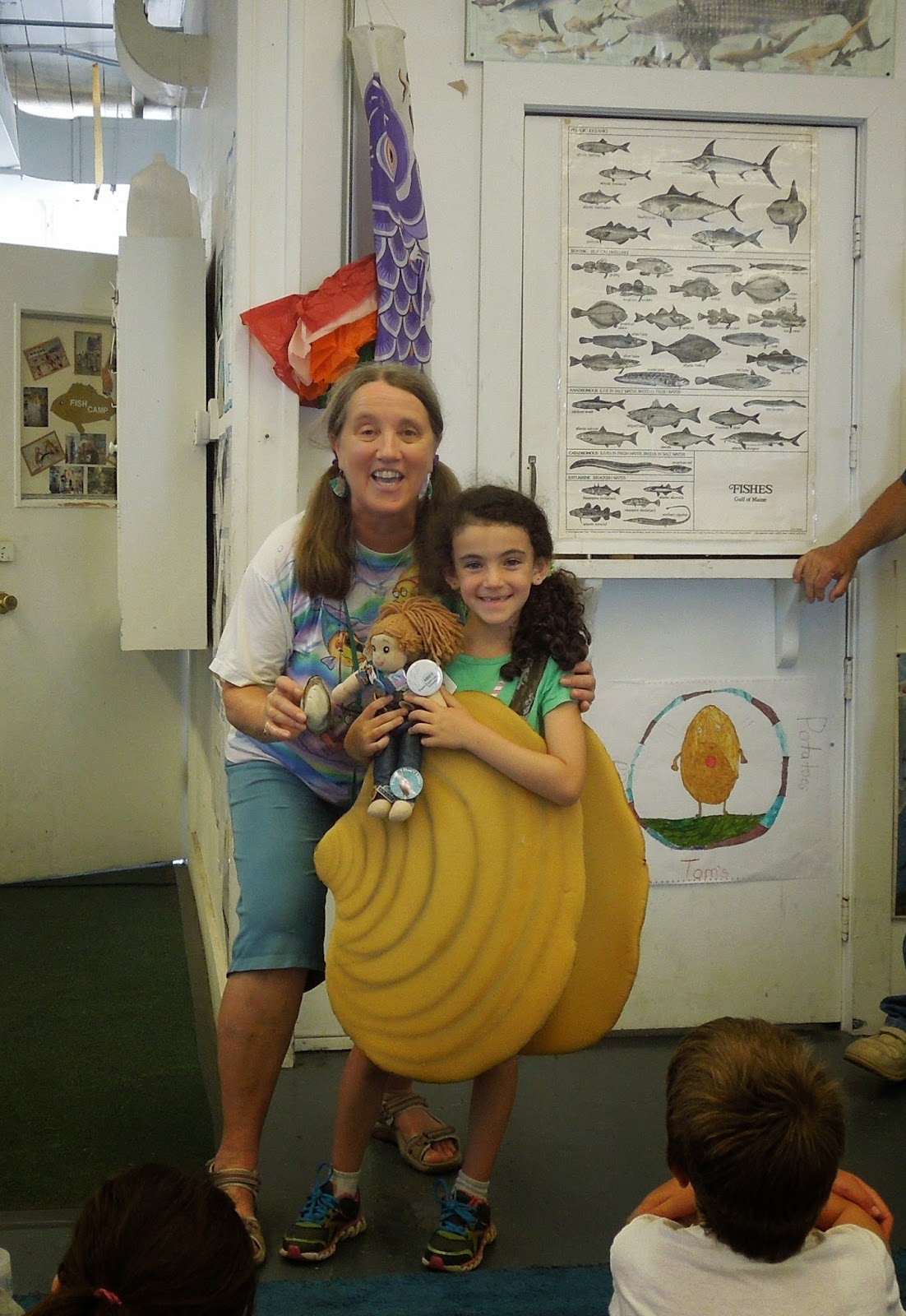 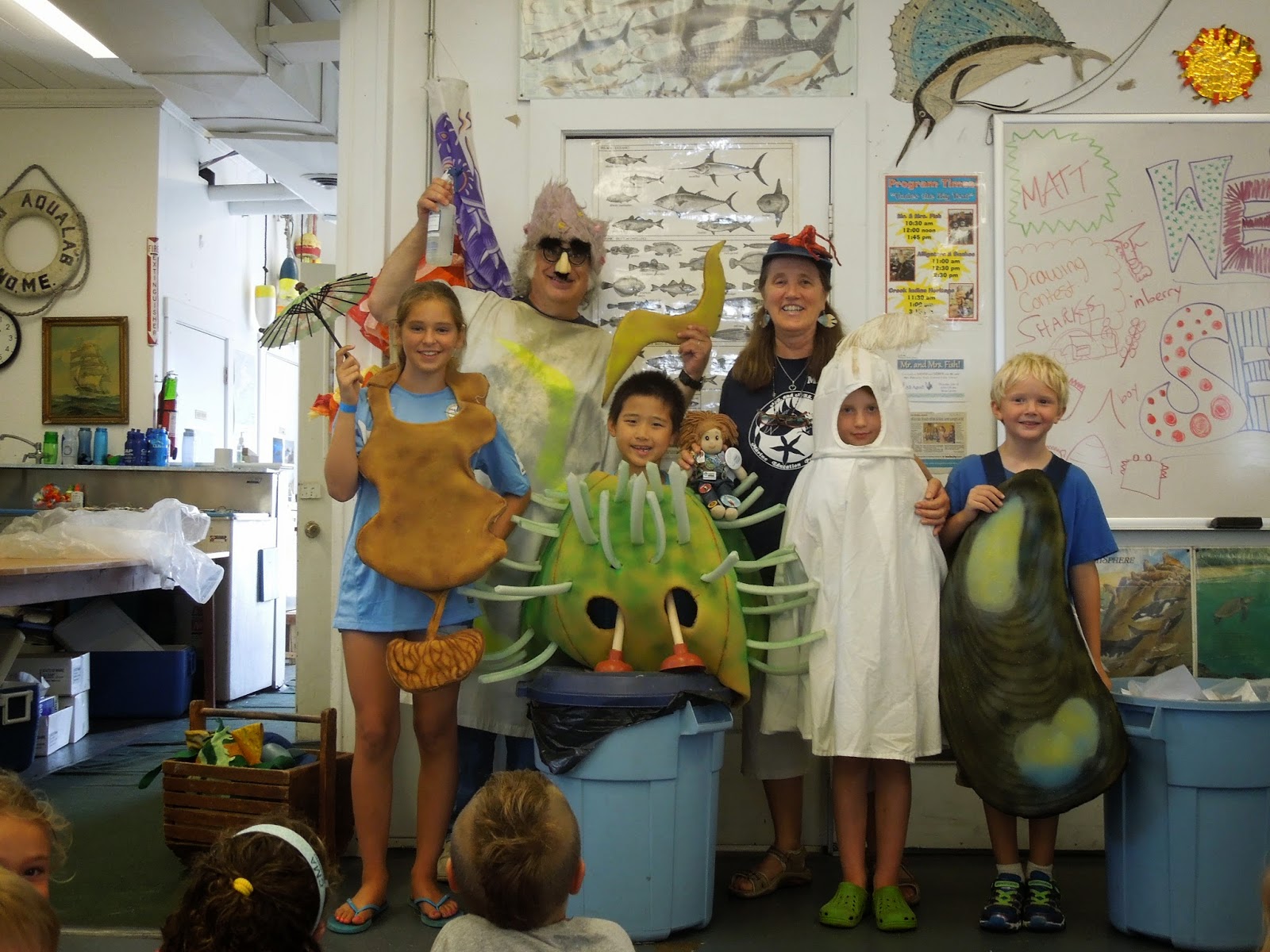 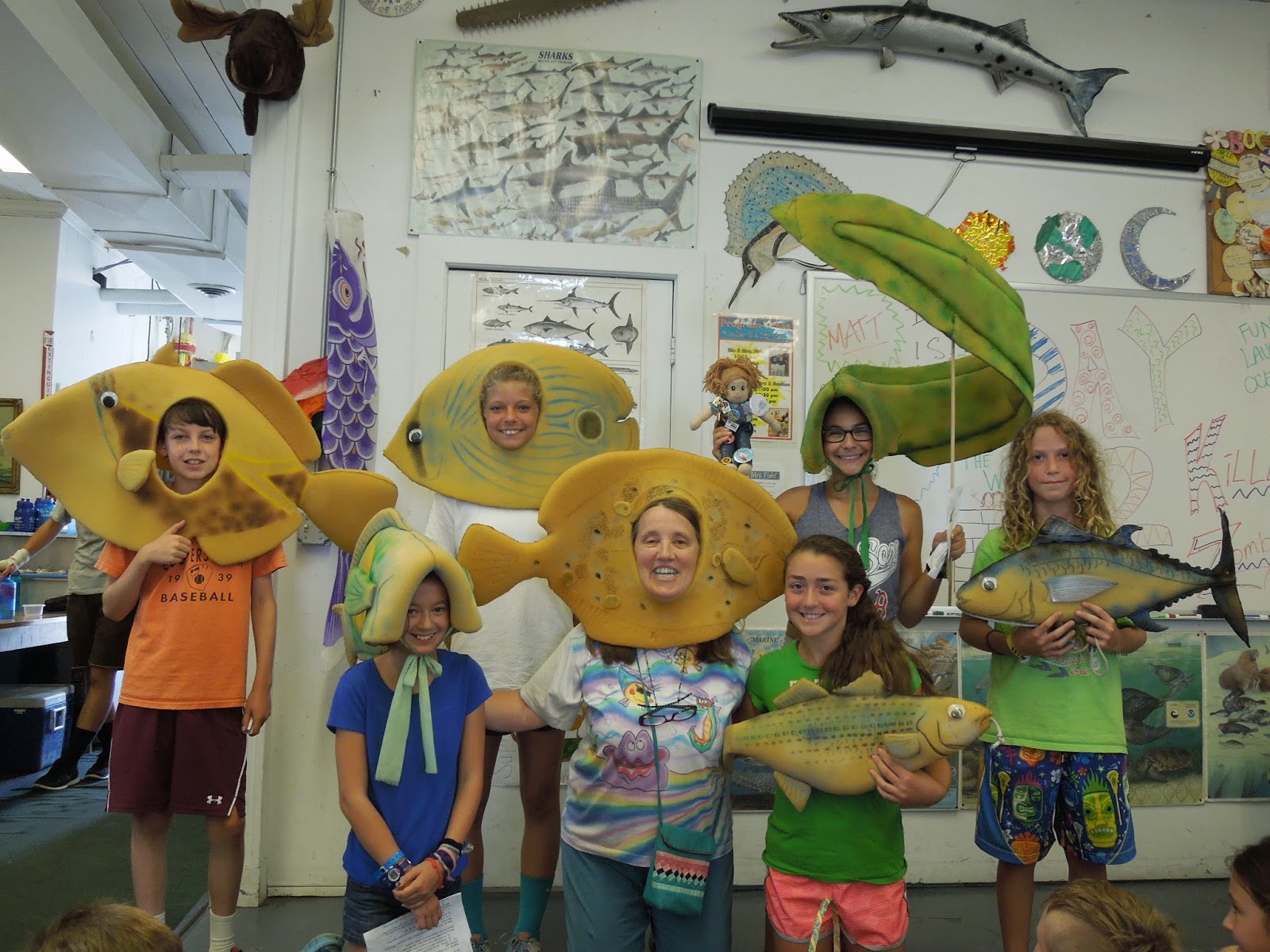 Outside of the classroom, I joined in the “Tests of Strength, Courage and Wisdom”  climbing the wall, 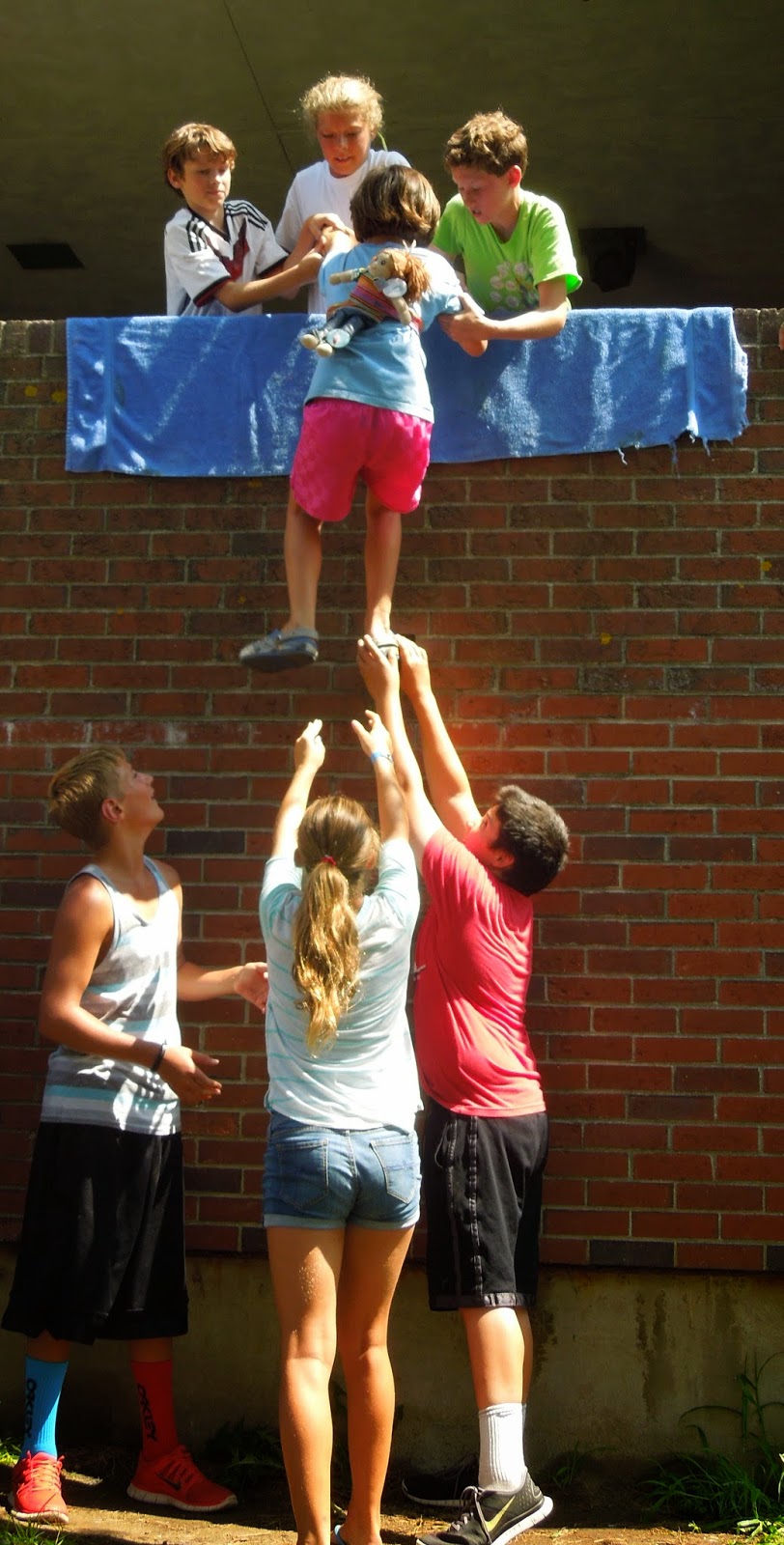 using a parachute to become a jellyfish, 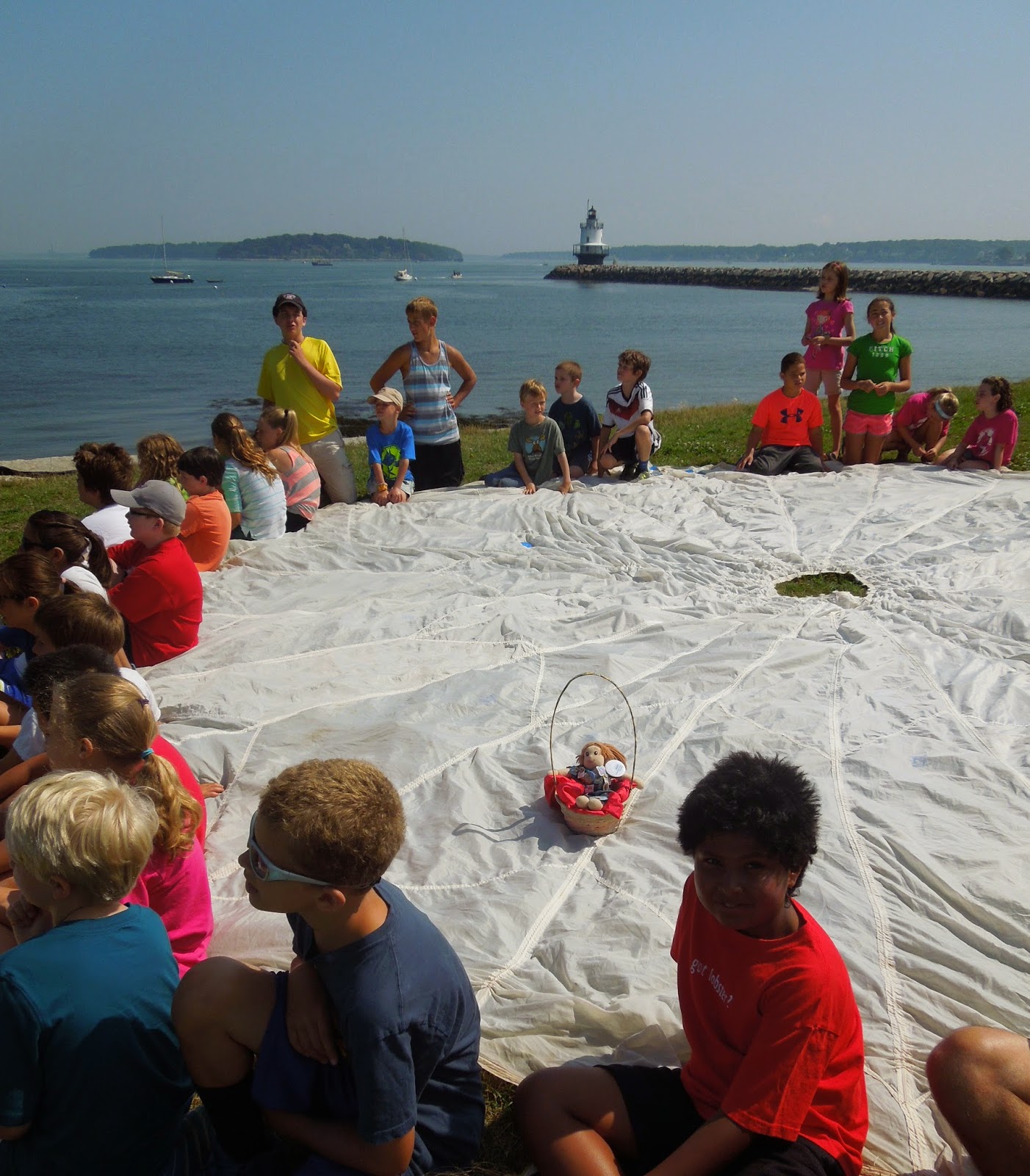 and joking with the Fish Campers as they prepared for exciting challenge activities.

Come rain or shine, nothing stopped us having fun!  When it rained, I became the caller for a tropical ocean bingo style game called Mango. 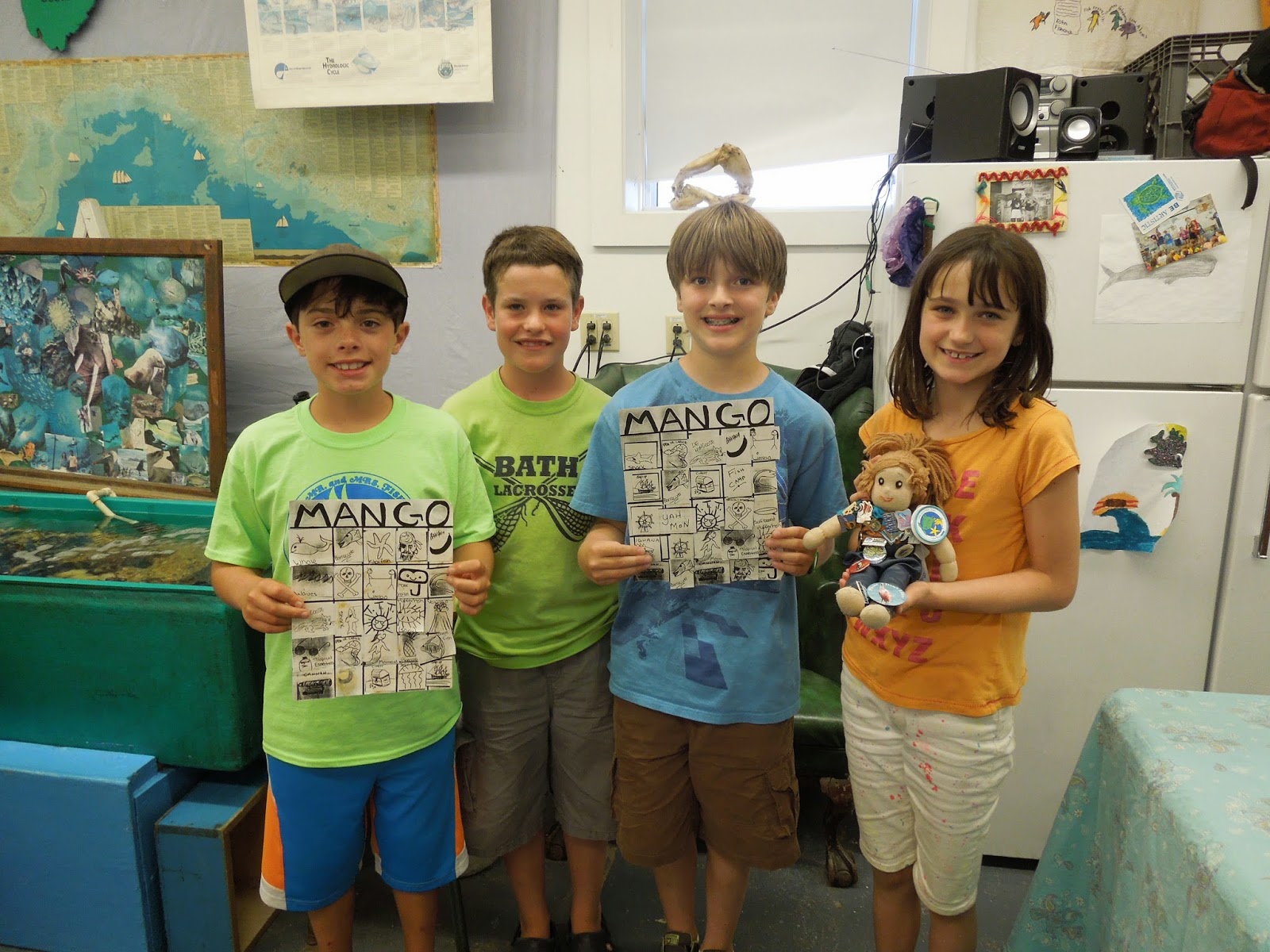 AND...I'm proud to say, I was one of the judges for the crazy hat and t-shirt contest. 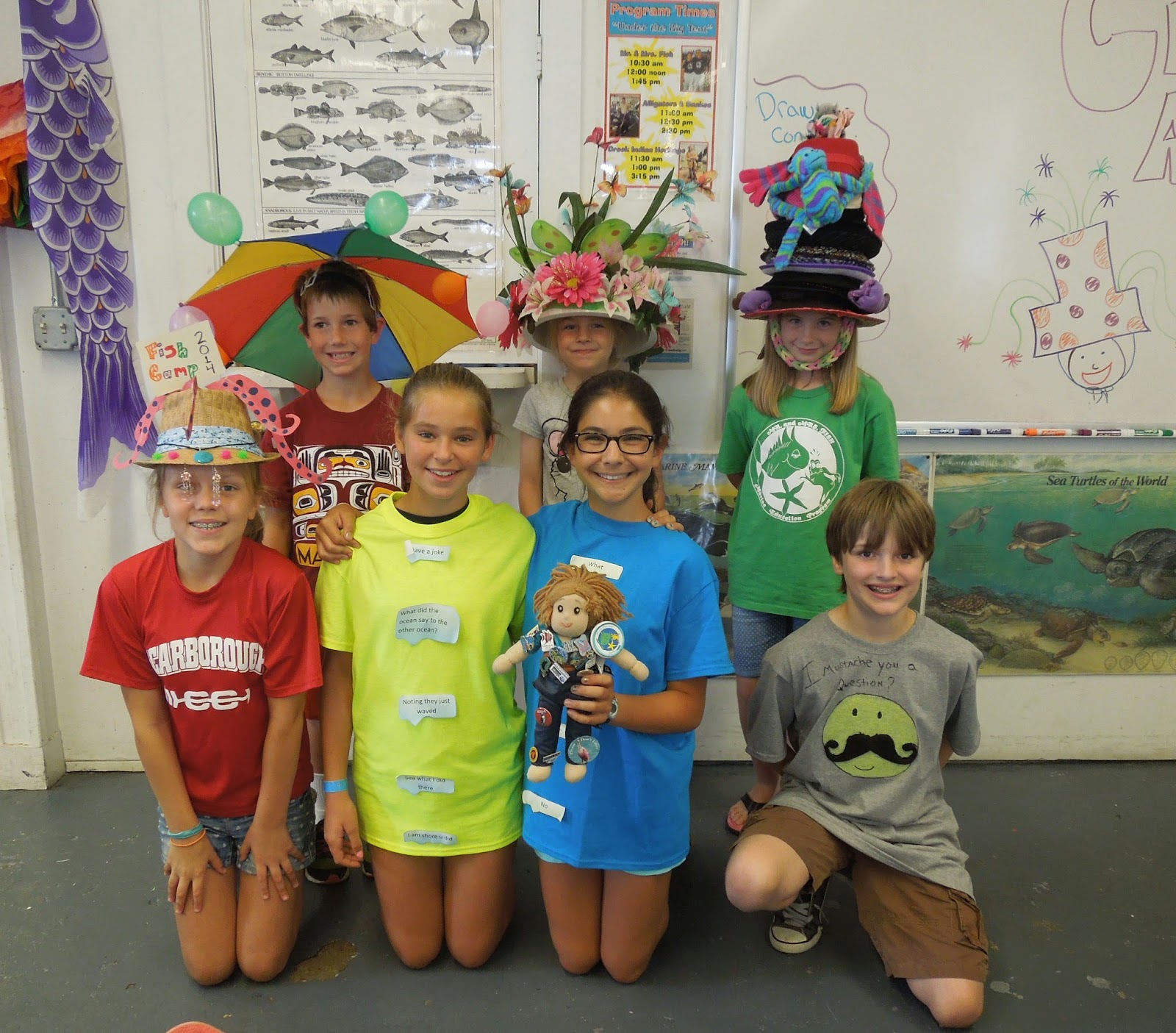 The campers thought I was a bit mad when I made friends with “Big Orange” the Fish Camp mascot and demonstrated how a cleaner wrasse contributes to dental hygiene in other fish. 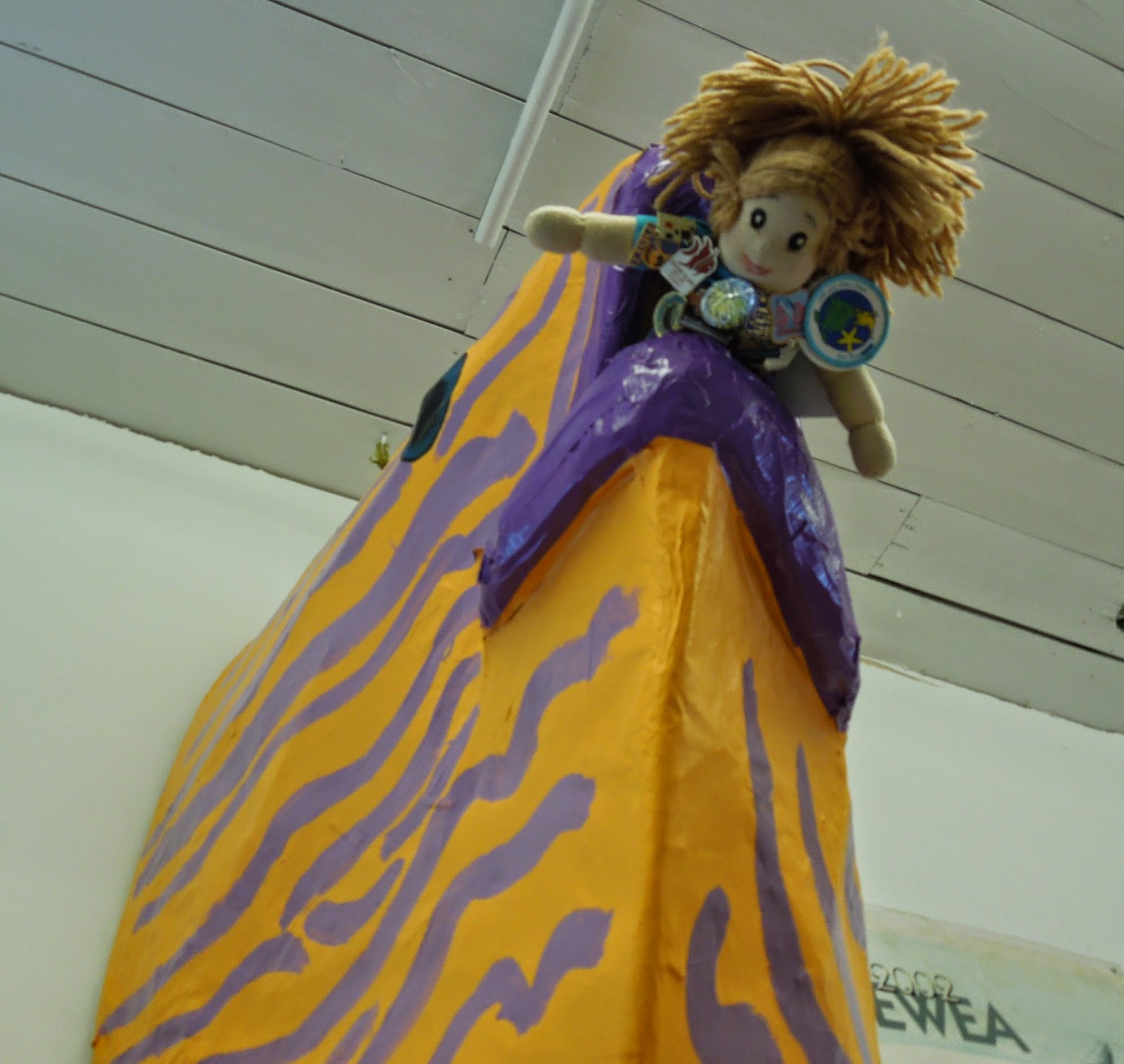 An guess what?!  I was voted “Honorary Staff” of Fish Camp!!!
So that was my awesome visit with Mr and Mrs Fish.  I hope I get to see them again.

From fish surveys to the DUOY educator workshop!

I got to attend the annual "Down Under, Out Yonder" (DUOY) educator workshop and scuba field experience at Flower Garden Banks National Marine Sanctuary (FGBNMS).  Participants learned about coral reefs (including reef fish ID) and how to teach about them in the classroom.   Everyone had fun because this involves lectures AND some fun activities that help everyone remember what they are taught (always handy!)  :)


More ation about the DUOY workshop is available at
http://flowergarden.noaa.gov/education/workshops.html

All FGBNMS educational activities are available as free downloads from the website at http://flowergarden.noaa.gov/document_library/eddocuments.html for those mommy's and teachers out there who may be interested
.
The DUOY workshop wasn't only on land though! On one of the evenings, everyone from the workshop boarded a live-aboard dive boat to head out to Flower Garden Banks National Marine Sanctuary for some diving. The sanctuary is over 100 miles from shore and it
takes 7-8 hours to get there, so everyone slept on the trip out to feel rested for the fun ahead.

When we woke up in the morning we had arrived at the sanctuary and it was time to dive.
Seas were quite calm and visibility was good, so we got some fantastic views of the reef and its inhabitants. Participants also conducted fish surveys as part of their training which gave them an appreciation for the difficulties of working underwater.
The nice thing is that they can continue doing this type of citizen science (google this, it means that everyone can get involved and help the scientists!!!) on their own after the workshop.

More ation on the fish survey program from REEF is available at
http://www.reef.org/


And at the end, even teachers have to take tests!
So a little bit of sunburn and a lot of fun later, I'm off to my next host...where will it be?


PS. All NOAA images credited to NOAA Flower Garden Banks National Marine Sanctuary
Posted by Abby at 11:36 AM No comments:

Cowboy hats and fish surveys for me!

In Texas, on my time off I got to wear cowboy hats and when I was "working" I got to wear a life jacket, immersion suit or sunglasses...ha ha ha ha!

While I visited Kelly, I got to take part in a research trip to Flower Garden Banks National Marine Sanctuary.
This trip was specifically to collect long-term monitoring data at Stetson Bank. Both researchers and volunteer science divers from Texas A&M University Galveston took part in this trip to collect images and conduct fish and benthic (bottom of the sea) surveys.
Here are some pics from our trip to show you what the scientists get up to:
Man I love this!  For more ation about Stetson Monitoring, go to
http://flowergarden.noaa.gov/science/stetsonmonitor.html

Some more of Texas...

I'm still in the land of everything that's BIG and I'm getting to do such cool stuff!!  After visiting OLE and seeing the Oregon II, I visited Kenny Guindon at Katie's Seafood Market in Galveston as his crew offloaded their most recent catch.  Agent Clark talked to them about their trip and sea conditions.

Katie's Seafood Market takes part in the Gulf Wild program (http://www.mygulfwild.us/GW/our-story/) that allows the tracking of responsibly-caught and safety tested seafood back to the fishermen who bring it in.  It's quite an amazing system: their uniquely numbered gill tag on every Gulf Wild fish tracks everything: who harvested the fish; where it comes from in the Gulf; and even at which port the fish was landed!  In South Africa we have MSC (Marine Stewardship Council) labels which are similar so if you're a South African wanting to know more and wanting to be able to make a difference, have a look at http://www.msc.org/about-us/what-we-do.

From the seafood market to the classroom...

I helped Kelly Drinnen (my host in Texas and sanctuary outreach specialist) teach a class on reef monitoring for a group of high school students taking part in a Sea Camp program through Texas A&M University at Galveston.
Part of the Long-Term Monitoring program at Flower Garden Banks National Marine Sanctuary includes taking photos at the same locations year after year, then comparing the images over time to identify any changes taking place in the habitat.

More information on their Long-Term Monitoring program in the sanctuary is available at
http://flowergarden.noaa.gov/science/monitor.html#longterm

and if you'd like a downloadable copy of the Reef Monitoring Lesson, it's available at http://flowergarden.noaa.gov/document_library/eddocuments.html#teach

Hmmm...what fun!  Anyone for some reef research?  Marine biology covers so much!!!

PS. All NOAA images credited to NOAA Flower Garden Banks National Marine Sanctuary
Posted by Abby at 10:50 AM No comments:

Yup, I've also been in the state where everything is BIGGER...TEXAS!!!!!  I was lucky enough to be invited to visit the Galveston Lab of NOAA (National Oceanographic ad Atmospheric Administration).  If you want to know more about them, go to: http://www.noaa.gov/

While I was there, I took part in NOAA Observer Training with the NOAA Fisheries staff.
NOAA Fisheries organizes fishery observers to collect catch and bycatch data from  commercial fishing and processing vessels.  The full Observer training is 3 weeks long, but I only had a week so I got a taster of what they get up to. This included mostly safety training because the job requires a lot of time at sea.

More ation about the NOAA Observer program can be found at
http://www.st.nmfs.noaa.gov/observer-home/

I was also lucky enough to visit with NOAA Office of Law Enforcement (OLE) agent Matt
Clark and made some rounds with him in . 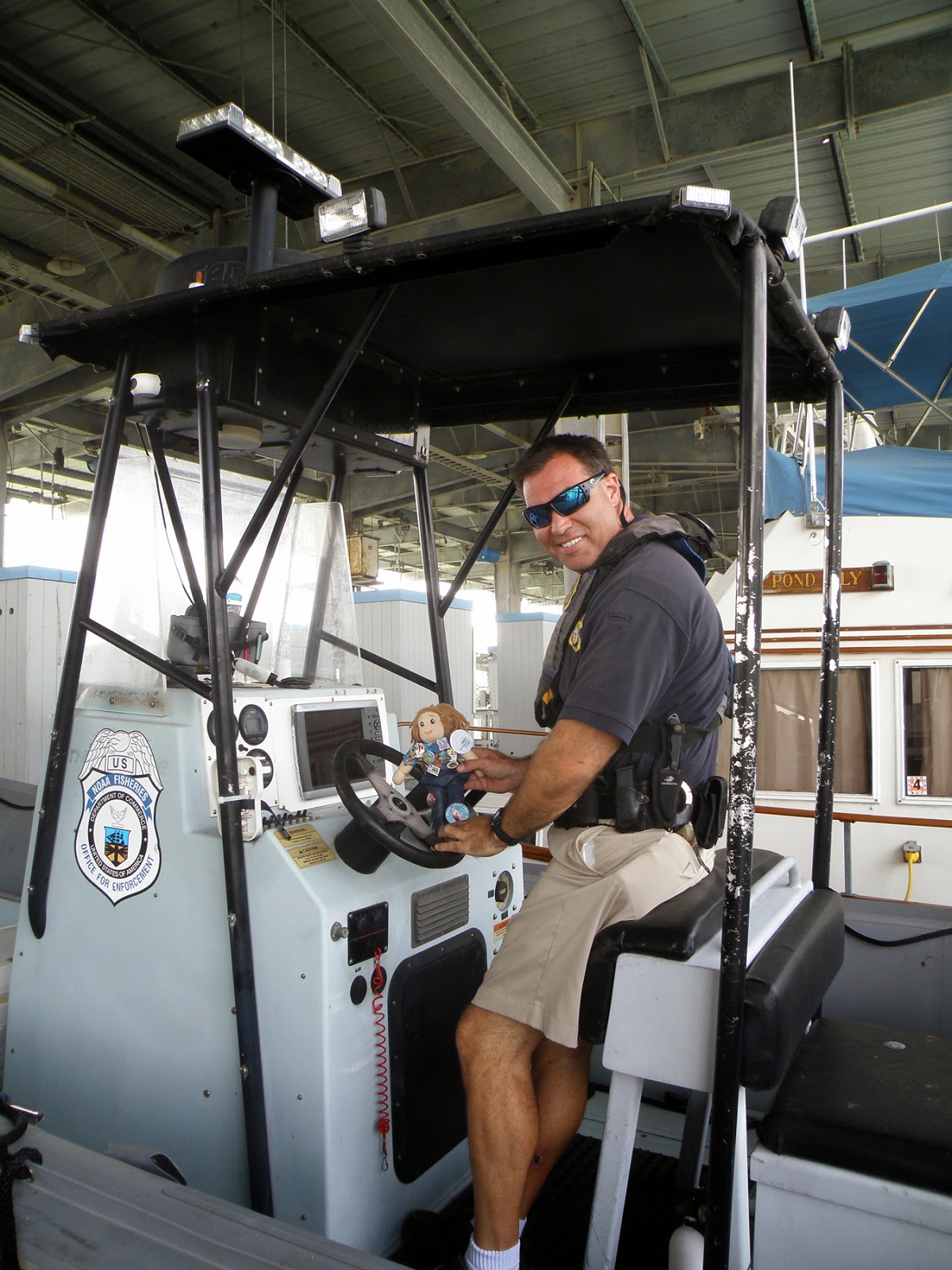 OLE works to prevent seafood fraud and illegal fishing. They also protect marine resources and their habitat and help safeguard the health of seafood consumers (you and me :)) and the livelihoods of coastal communities.

More ation about NOAA OLE can be found at http://www.nmfs.noaa.gov/ole/

While checking things out around , OLE visited briefly with NOAA Ship Oregon II that was docked at Pier 21 in . Oregon II is a NOAA Fisheries research vessel that operates
largely in the  and occasionally makes port in .  Built in 1967, Oregon II is the oldest research vessel in the NOAA fleet. 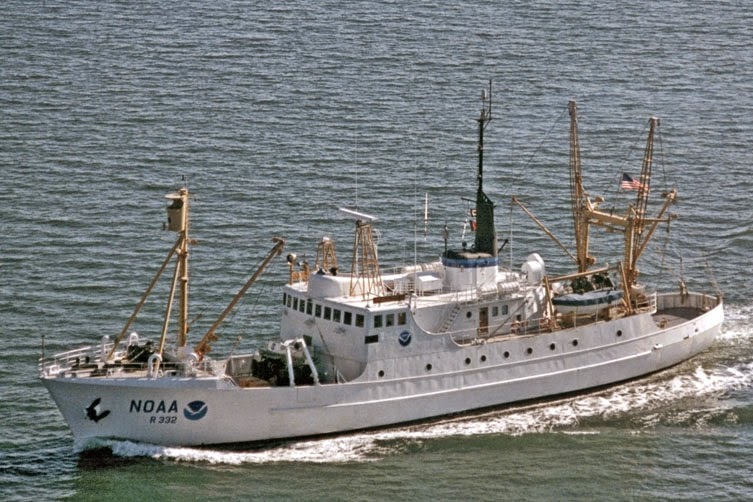 For those of you who'd like to know more about what goes on when the ship goes to see for a research expedition, read this: http://www.nmfs.noaa.gov/stories/2013/10/10_18_13photo_journey_fish_survey.html

For the moms and dads who might want to know more about the ship's design, here's a pdf: http://spo.nmfs.noaa.gov/Circulars/CIRC256.pdf


Fascinating stuff!!  And who said that being a marine biologist meant that you just swim with dolphins all day?!?!?  How boring!

PS. All NOAA images credited to NOAA Flower Garden Banks National Marine Sanctuary
Posted by Abby at 10:18 AM No comments: