Waddling for a good cause 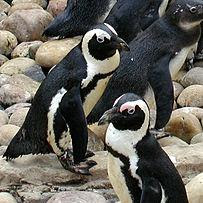 If you're needing some exercise and want to try and help save the African Penguin, then the "Waddle" may be just the thing for you (next year)!  This last week, 16 animal keepers from zoos and aquariums around South Africa walked a distance of 120km between Gansbaai and Simonstown.  All 3 South African penguin colonies were visited along their route: Dyer Island colony in Gansbaai, Stony Point colony in Betty's Bay and Boulders Beach colony in Simonstown. 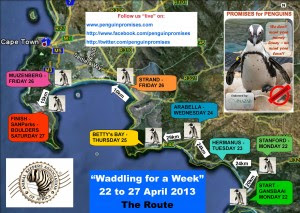 What started as a pet project for a few keepers in 2011 has grown into quite an event and the media and public have been very supportive.  Penguin Promises is a campaign which was ‘hatched’ in 2011 when the AKAA (Animal Keepers Association of Africa) decided to choose an endangered species and create an awareness drive in support of it.

The African penguin was chosen as their numbers are currently as low as 60,000 birds in the wild compared to a very healthy population about 100 years ago of approximately 1.5 million. Scientists claim that this species could go extinct within the next 15-25 years, should environmental conditions not improve for them. This bird is endemic to southern Africa and considered an iconic animal as well as an indicator species (indicating the state of our oceans).
As the waddlers walk, they are joined by members of the public, school children and other keepers all dressed in black and white to show their support for the penguins.  Bright yellow "Hoot for penguins" signs are carried by any willing volunteers to encourage passing traffic to join in.  Last year, they counted 682 cars hooting for the waddlers just during the 11km stretch through Strand!
Instead of asking for money, the waddlers respond with: "We don’t want your money honey we want your love”.  Penguin Promises suggest that, to show that you care, instead of giving money, you make a conscious choice to change an aspect of your behavior that will have a positive effect on the environment.  A few examples of penguin promises are - recycling/reusing/reducing, saving water and electricity, planting an organic vegetable garden, using eco-friendly cleaners, refusing drinking straws and the single use plastic shopping bag.
It has been shown that many people making a small lifestyle change can make an enormous difference!  So if you're in the area in 2014, why not waddle on down and join these crazy keepers on a leg of their six day walking tour and make a difference.  In the mean time, why not make a promise?!
More information is available on www.penguinpromises.com
Posted by Abby at 11:59 AM No comments:

I have to backtrack a little with my travels because I've gotten behind with my photos so this entry in my journal is all about  my visit with Ron and his friend Fred the Monkey in Washington State, USA.

Ron Hirschi, a fisheries biologist and children's book author, was shocked by the story of how albatross chicks were dying because their parents were feeding them plastic pieces that they had mistaken for squid and other fish.  He decided that Fred needed to teach everyone about the dangers of marine litter and what is happening to the albatross.  Fred has also been travelling around the world, visiting schools and doing beach and river clean-ups.  If you want to read more about his adventures, go to www.http://soaronhirschi.blogspot.com/2011/03/fred-happy-eyed-monkey.html

Ron was nice enough to have me visit and he took me to see a bunch of cool kids at a school that is closing down.  It's so sad, because of money issues and the economy the way it is, these kids have to find a new school.  They're the kids from Breidablik School. 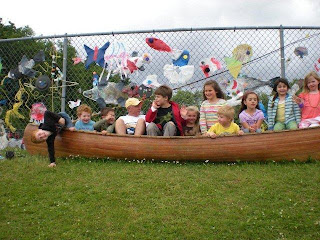 These kids worked with Ron for a year.  They collected thousands of bottle caps and used them in an outdoor mural that you can see in the photo above.  Rubbish collected from nearby beaches and recycled plastic bits and pieces were used to make the fish and other sealife in the mural that's attached to their playground fence. 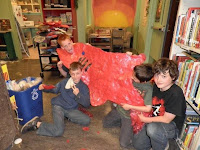 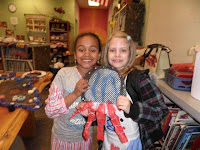 Here you can see some of the kids with their works of art....a big red shark and a jellyfish!

So Sea Fans, why not do a beach clean-up at your local beach (or river if you live inland) with your school or homeschool buddies and make some cool art like these guys and girls?  Send me a pic if you do! (abby@telkomsa.net)

I've wanted to see Tasmania for a while now, all the photos that I've seen look so amazing...nature, nature and more nature!  So, guess what...I went there!  Thanks to Pam Elliot, my host, I got to see more than just Tasmanian nature, I got to see Woodbridge Island Marine Discovery Centre and what the staff and kids there get up to.  (Woodbridge Island is the most southern Marine Discovery Centre!!)

I helped to clean the marine pond, checked out the touch tank, 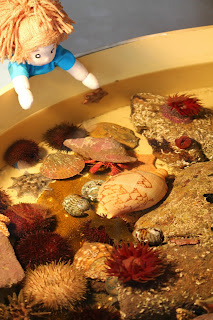 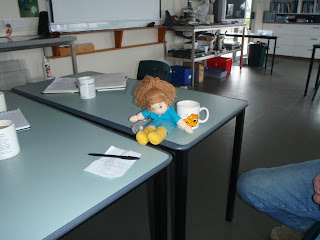 taught students about the impact of plastic on seabirds,
and explored the unique D’Entrecasteaux Channel. One of the highlights of my trip was taking some secondary students out on the research vessel the Penghana. 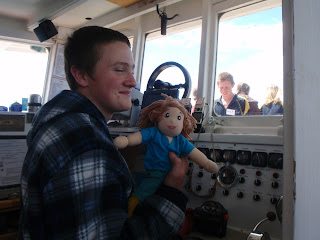 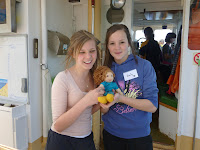 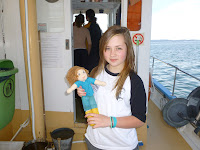 has an incredibly high marine biodiversity and a recent study has found an amazing 90% endemicity (belonging to a particular country). They also have some areas off the east coast where the sea surface temperatures are changing 3 times faster than the global average!! Together with the close proximity to the Southern Ocean and this makes it a very interesting marine environment – and an exciting one to show students.

So how about a visit to Tazzie Sea Fans?  I'd recommend it!  Thanks Pam for a great visit.
Have a fantastic week and chat soon.