A recent sighting of an Ocean Sunfish in the harbour got me thinking.  There are so many weird and wonderful creatures in the sea and I've only talked about the more common ones most people see.  A friend of mine loves the Sunfish, it's his favourite animal so I think I need to tell you more about it. 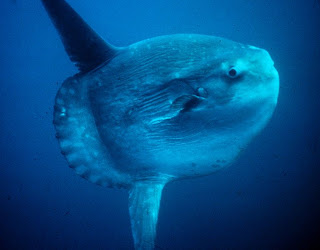 Sunfish have been kept in aquariums, but the way mice flock to cheese, parasites flock to sunfish!!  They are a parasitologist's (a person who studies parasites) dream and can be an aquarist's nightmare because new species of parasites can be found at any time and we don't like parasites!!!  Some parasites don't do any harm to the animal that they are on (their HOST), but some can do a lot of damage and even kill an animal so we need to be very careful.

But enough about the yucky stuff, let me tell you a bit more about the interesting things.  The Ocean Sunfish (also known by its scientific name, Mola Mola) can grow to be a massive fish, the maximum length is over 3 metres and the maximum published weight is 2 300 kg!  That's like 2 300 bags of the 1kg bags of sugar that your mom buys at the shops!  Look at the photo below and you can see how big these amazing fish get in comparison to us.

This fish is registered as the heaviest bony fish and as the one with the most eggs in the Guinness Book of World Records!

These fish don't have scales, they have extremely thick, elastic skin and they swim using their strange dorsal (top) and anal fins (the one at the bottom near the back).  These fins are flapped in time to push the fish forward at a surprising speed.  For such a big animal, their mouths are very small and they have a parrot-like beak (remember the Parrotfish also have this) which helps them eat crustaceans (eg. crabs) and molluscs (eg. squid) but they love their jellyfish.  We used to have sunfish at the aquarium that we were nursing back to health and we fed them specially-made jelly with mushed up bits and pieces inside... and added vitamins.  They love the jelly!

Ocean Sunfish are found at depths of up to 480 m, but they like to come to the surface to sun themselves where they lay on their sides and look like huge saucers.  Have a look at the photo below at the sunfish coming up to the surface, you'd think a shark was following you wouldn't you?! 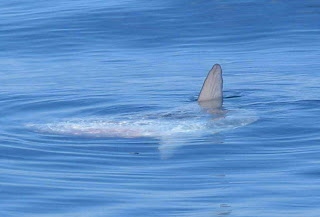 So that's my little bit about the Ocean Sunfish.  Amazing animals, don't you think?  Now that I've started, I can't wait to tell you more about the other weird animals in the sea, but I'll have to leave it for another time.

Have a great week Sea Fans.