Now why would anyone want to name an animal this? I recently met a man who is trying to change this as well as the way people look at sharks and specifically the Great White. 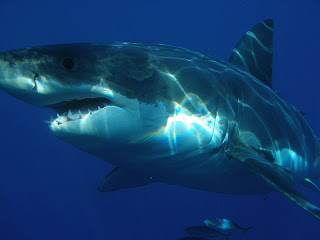 A bit of a different start to the blog today, but I thought I just had to give a taster of what’s to come. Can you believe that this is what the Great White Shark is called in Afrikaans?! Well, many people have started calling it the “Groot Wit Haai” which is a direct translation, but why not? Why must the Great White be seen as a DEATH shark? Since the movie JAWS, people have been scared out of the ocean’s waters when in fact, there are so many more human deaths that are caused by cars per year and even simple things like toasters have killed more people than sharks.


Let’s all stick together on this one and help our friends in the sea – they do what comes naturally to them, they are predators, but we are not a part of their food chain.  Great White Sharks are not swimming around looking for the next human to eat and besides, we eat so much junk these days, why would they want food with tartrazine, tons of sugar, MSG, preservatives and colourants? They want fish and marine mammals: they’re tastier and contain a lot less additives!

It’s funny how people get scared of something, but are still fascinated by it. How many of you “hate” snakes but if there’s a huge python or Boa Constrictor on offer for photographs, you’re the first in line to touch it?
Well, sharks are the same. So many people say that they don’t want to dive in the sea or go swimming at certain beaches because of the possibility of seeing a shark (Trust me, this doesn’t happen often, I’ve been diving for years and I haven’t seen many sharks.) The funny thing is, these are usually the first people who want to see the sharks at the aquarium, dive with them in a cage and touch them at the touch tanks.  One thing is certain, it’s the things you don’t know that you fear because the more you get to know about sharks (thanks to TV, aquariums and magazines), the less you fear them (this doesn’t mean that you don’t have a healthy respect for them)...and the more fascinating they become!

Let me introduce you to some cool sharks (and if you want to learn a whole lot more about different
sharks and other predators, you can buy my second book, Predators. Order online or mail me at abby@telkomsa.net and I’ll personally make sure you get one…and autograph it if you’d like). 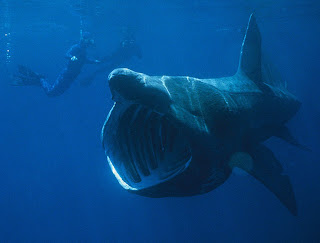 The Seven-gill Shark:
The Zebra Shark: 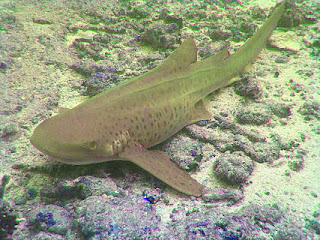