What goes up must come down!

Have you heard the saying: “What goes up must come down” before? Well, it’s so true. Let me tell you how I came across this saying again.

This week we had so many people at the aquarium, it felt like holidays all over again! It’s great for business, but it makes getting around the aquarium really difficult sometimes – especially when you’re carrying buckets of water with artemia in (artemia = sea monkeys = the little marine animals that look like insects which we use as food for a lot of our small fish, jellyfish and corals).

I’ve often found myself having to ask guests very politely to move out the way because they are so amazed by the animals and the exhibits that they don’t see us running around. Which I guess is a good thing because it means that we’ve done our job well. : )

Anyway, with all the hustle and bustle, a few kids managed to sneak balloons into the aquarium. It didn’t take long and two balloons were popped, right above the turtle tank which doesn't have a cover on it! This is one of the worst things that you can do, turtles often mistake balloons for food and so they swallow the balloon and it gets stuck inside the turtle.  This causes its real food to get stuck there too, sometimes blocking the whole intestine or stomach and causing an infection.  With wild turtles, this can cause an animal to starve because there aren’t humans checking on them everyday who can see when something’s wrong.  Luckily, we managed to get the balloons out without much fuss, but something even worse could have happened, they could have been released into the air by accident and what goes up must come down.   Please Sea Fans, rather don’t buy balloons and if you find one floating in the sea, river, dam or lake, please fish it out before a fish or something else eats it. 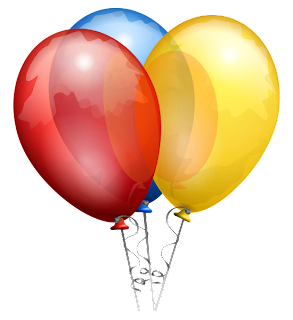 Here are a few scary facts:

o Almost all balloons released are tied with ribbons and strings which entangle, strangle and kill marine life.

o Latex balloons float for just 10 hours but can take up to a year or more to degrade.

o There is a greater than 70% chance that airborne balloons, or pieces of them, will end up in the oceans and harm marine life.

Just remember, releasing balloons into the air is littering!

Have a great weekend Sea Fans and please keep an eye out for colourful balloons that may be floating in the water when you're out there having fun.