It's been a busy time again with expos and school talks but before I tell you about the events that I've been to, let me tell you a little more about an amazing creature that I got to see this last week at the Wits University Museum (it wasn't alive, but I've only ever seen them in books so it was amazing to see it!)....the GLASS SEA SPONGE! 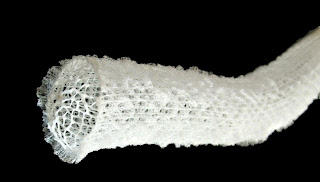 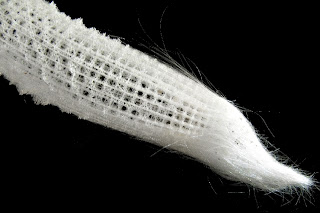 Yes, the easy way to remember it is as Sponge Bob's cousin, but it's so much more impressive than Sponge Bob!
Glass Sea Sponges are almost entirely deep-water and not suitable for your aquarium at home. The most amazing part about these sponges is that they don't look like a sponge, they look more like a skeleton of an eel or something and they look very fragile.  They are actually very strong though!  Architects and scientists have found that the structure of these sponges is so strong that they have copied it when building bridges and buildings.  (There are already some buildings that have the same structure and those architects probably didn't realise at the time that there was a sea sponge built the same - have a look at the Swiss Re Tower in London and the Eiffel Tower in Paris).  They're even looking into making fibre optic cables stronger by using the sponge design!!!  Amazing how we can learn from nature!  (In case you're interested, or your parents want to know more, this is called BIOMIMICRY - basically: copying nature).

The most well known of the glass sea sponges is the Venus's flower basket. This sponge has become popular as a collectors' item, but was traditionally given as a wedding gift in some Asian cultures because there are little shrimp (a male and a female) which climb inside the sponge as larvae (babies), and then become trapped there as they grow. These are considered a good luck gift for a wedding couple as a symbol of the lifetime bond between the two partners.

Nature is amazing...what more can I say!

Have a great week Sea Fans and chat soon.