Not so HAPPY FEET

Anybody watched the movie Surf's Up?  And Happy Feet?  Well, you can guess which animal I'm going to tell you about can't you?!  A PENGUIN!  And not just any penguin, mind you, but Rocky the Rockhopper penguin at the Two Oceans Aquarium in Cape Town, South Africa. 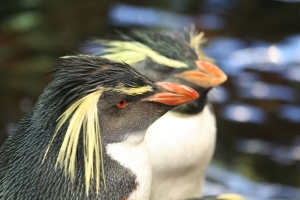 Poor old Rocky has sore feet!  He was found stranded in 1999 and taken to the aquarium for rehabilitation where he's been ever since.  He has a limp and suffers from arthritis (swelling of the joints - the place where bones meet).  Poor little guy, but he's lucky because he's getting 5 star treatment!

Rocky is carried between the two penguin areas (we wouldn't want him to put too much pressure on his joints!), he's had an operation on his foot, pulse magnetic therapy and gets acupuncture treatment.  Talk about going all out for your animals!  The staff watch his weight closely and he has nice swims in cold water which seems to reduce the swelling too.

Now who said you had to be human to enjoy life?!