This is my last post about my visit with the whale! If you remember, I was in Massachusetts with Cynde McInnis and The Whalemobile. The Whalemobile is a life-sized inflatable humpback whale, modeled after an actual whale that summers off the coast of MA.

The whale is named Nile, and she was 27 years old this year. Cynde helps keep track of the different whales that come off the coast, and Nile has quite a family (although they rarely ever associate with one another as adults). Her mother Mars, first seen in 1979, has had 10 calves over the past 35 years. Nile was born in 1987 and she has had 5 calves. She had her fifth calf with her this past season. The researchers hope to see Nile’s calf next summer!

I left off the last blog at the point where we were going to go inside Nile! It’s so big when you get inside! When Cynde had the whale made, she had the heart, lungs, stomach, ribs and vertebrae sewn on the inside as well. 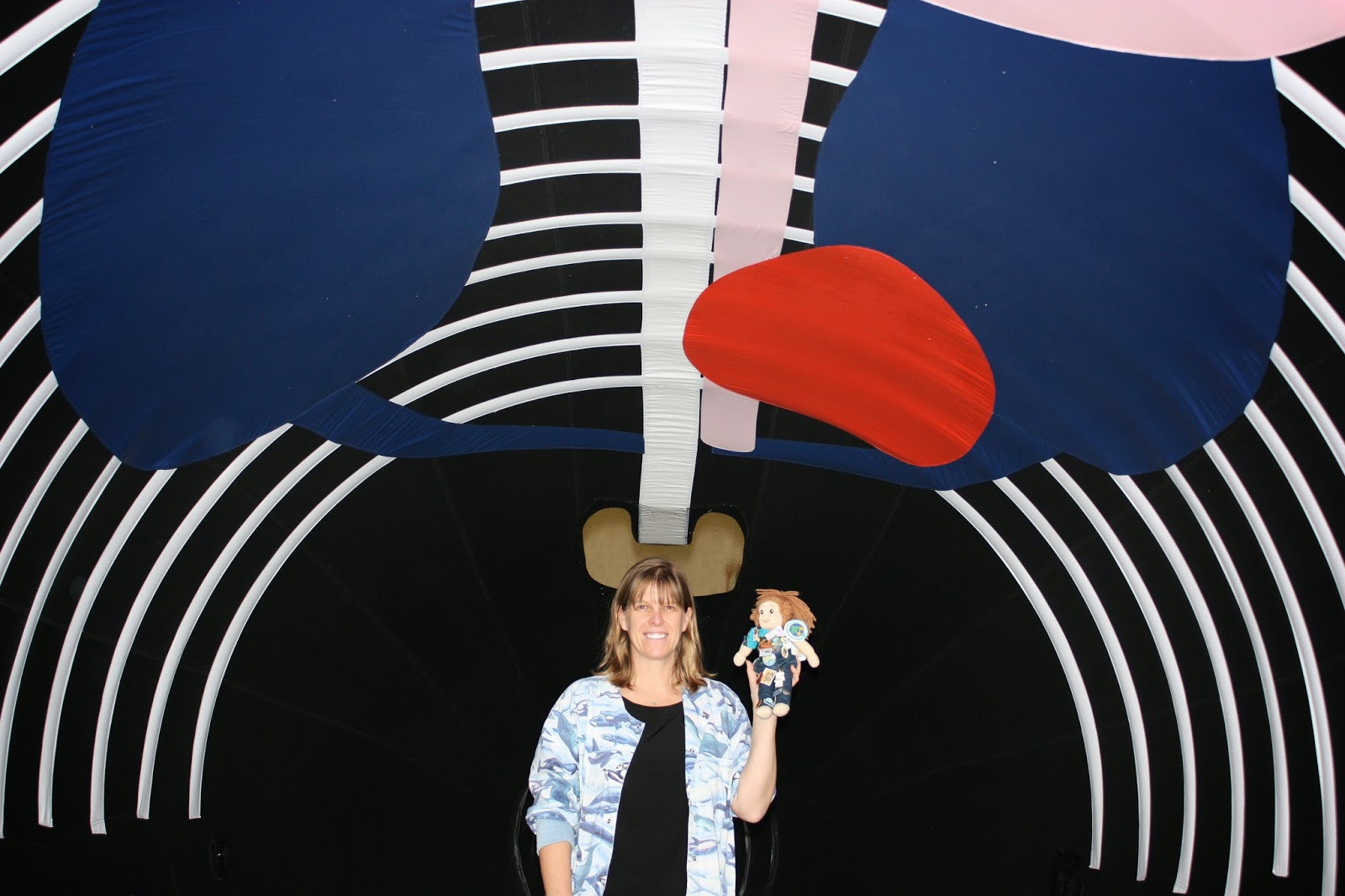 A whole class of students (about 25) can fit inside the whale together. It’s a little dark so Cynde has a flashlight and uses it to point all different parts of the whale. She starts with the heart. It’s bigger than a big exercise ball, and in a blue whales, it’s the size of a small car! A whale’s heart beat is much slower than humans. The kids clap their own heart beat and then follow Cynde’s clap to illustrate the whale’s heart beat! They always have a look of surprise on their face when they clap every 6 seconds or so.

Next, Cynde talks about the blowholes and lungs. The whale’s lungs are the size of an adult sleeping bag! While in that area, she points out the ribs and vertebrae that go all the way to the whale’s tail, but not in the tail. Finally, she talks about the mouth and how huge it is. Did you know a humpback whale jaw bone is about 8-10 ft long? Put your thumb on your chin and then your index finger on your ear lobe. That’s about how long your jaw is. It’s a lot smaller! When the whales feed, they open their mouths, scoop up huge amounts of fish and water, and then they use their tongue to push the water out through the baleen plates. The fish then go down their throat to their stomach where they are digested. Cynde asks, “Then what happens?”

Poop!! Yes, as a scientist on the whale watch boat, Cynde keeps track of the color of the whale’s poop. What would that tell her? What the whales eat! If they are eating sand eels, the poop is brown, and if they feed on krill, it turns fire engine red! Now, whale poop has gotten a lot of attention in the media lately. Cynde asks, “Does whale poop benefit the ocean at all?” What does a farmer put on his crops? Manure, right? Why? There are nutrients in the poop that help the plants grow. Again, the same thing is going on in the ocean. The whale poop acts as fertilizer in the ocean. The more whales, the more poop, the more nutrients, the more plankton. Now, does phytoplankton benefit humans? Take two breaths. You can thank plankton in the ocean for one of them. They produce over half the oxygen that we breathe on the planet! I loved watching the students put together that whale poop benefits humans!

The last thing the students did was talk with Captain John who runs the whale watch boat. He talked trash with the students. Well, he talked about marine debris. He shared with them different pieces of trash that are found in the ocean and which animals can be injured by them. Plastic grocery bags are often found in the bellies of whales when they wash up on the beach. Plastic bits can be found in turtles and birds. They talked about recycling and how important that is to be conscious of the choices that we make. Instead of using plastic water bottles, the kids remembered to use reusable ones. Instead of taking those plastic bags from the shop, they talked about taking cloth bags to the shop. It’s so encouraging to ask the students, “Who recycles at home?” Their response is, “Of course!”

All in all, I had a great time with Cynde and Nile and learned so much about whales! Hope you are all having a wonderful holiday and stay tuned for my next adventure!!