I've really been so lucky, what started as a 1 year round-the-world-trip to visit people working with marine life, has ended up being 5 1/2 years so far!  Thank you to everyone who has hosted me and shown me what they do in a day, it's been a blast!


So anyway, my next stop was Columbus Zoo and Aquarium.  Gee, where do I start?  I got to experience so much... let's start with the Manatee Rehabilitation Partnership (MRP).

"The highest single cause of mortality to manatees is boat strikes.  Manatees also face being entangled in fishing lines, deal with pollution, entrapment, harassment (calf and mother are separated), habitat loss, cold stress, and red tide. We see animals here that are recovering from injuries, calves that are orphaned, and animals suffering from cold stress. Cold stress happens when the water temperature drops below 68° F and can leads to lethargy, anorexia, hypothermia and even death. This predisposes animals to a variety of infections, causes organ groups to shut down, loss of skin, as well as pneumonia and death." Mallory Seibold

Columbus Zoo and Aquarium is the most northern facility in the US to rehabilitate and release Florida manateees. Due to their large appetites (and they can eat LOTS!!!!!!!!!!!), the manatees are some of the most expensive animals to feed here.  They don't just eat lettuces, they also get sweet potatoes and apples for treats :)

The Manatee Coast exhibit has 5 manatees: Stubby (who lives here permanently because she lost most of her tail and can't swim properly); June Bug; Jedi; Millenium; and Falcon.  (Except Stubby, they are all juveniles who were orphaned at a young age and couldn't survive on their own. Millenium and Falcon are the smallest and youngest manatees that CZA has ever cared for...and they're twins! Very unusual for manatees.) 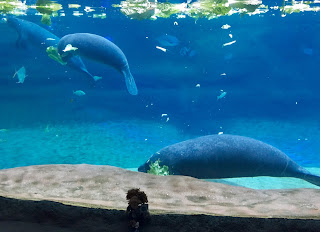 Stubby gets to do training sessions where she rolls on her back and presents her flipper for medical exams - I got to help Kevin, the trainer! 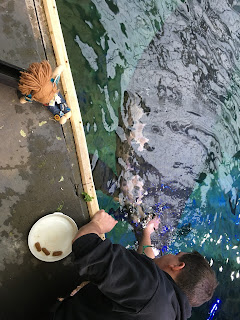