Here's the next bit of my Oregon adventures:

Hey, the weather has changed.  All that nice warm sunlight from yesterday has been replaced by clouds, wind, and rain.  Gene says this is normal for the coast... hmmm, not sure I like this weather. 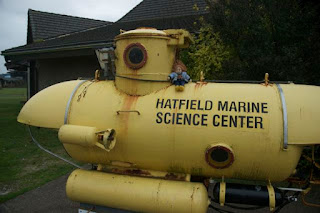 When we arrived at Hatfield, which is just around the corner from the aquarium, the first thing I saw was this really cool one-person submarine and I ran right over and climbed on top to pose for a photo. 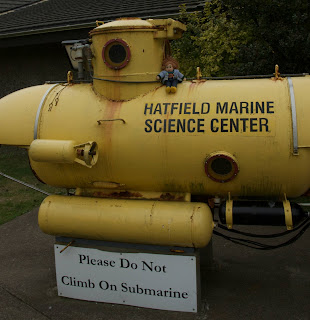 Then Gene pointed out the sign...all I can say is, OOPS! (Sorry, I'll read before I act next time!) 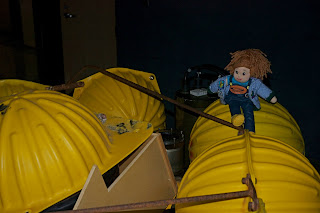 Once inside the centre, I was fascinated by this contraption that looked like a bunch of huge construction hats connected together.  It turned out that they were floats attached to a thing called a "rumbleometer".  It was used to study underwater volcanoes off the coast of . 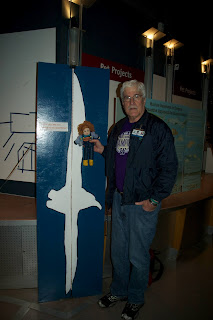 Then I got my picture taken with Gene standing next to a poster that shows the wingspan of an albatross.  Gene is 6 foot 8, and the bird has a wingspan of 6 foot 10.  I suddenly felt very small.  I think I'm going to have to write a blog just on the albatross...it's an amazing bird that spends most of its time in the sky.

Many of the displays at Hatfield highlight the research being done by scientists at .
When we left Hatfield we walked a couple of blocks down to the pier where OSU’s research vessels are docked.
Gene tells me that just two days after I left there was quite a fuss made when Dr. Hanshumaker went diving under the hull of the replacement ship and found an invasive species of barnacle that is not normally found in .  Fortunately scientists quickly found out that this barnacle couldn’t survive and reproduce in the bay (shew!  Invasive species can be a real problem, have a look at the Blue Mussel that's made its way down to South Africa, it's taking over the Black Mussel's home).

My last stop on my visit to was the beautiful Yaquina Head Lighthouse.  Built on a 65 million year-old lava flow back in 1873, the lighthouse is still in service.  Its light is perched 52 m above the ocean and can be seen more than 30 km out to sea.  It had been misty and drizzling all morning, but as we headed north to the lighthouse the wind started to blow hard and the rain was really coming down, so when we got to Yaquina Head, I chose the easy option (I didn't want to get all wet!) and chose to look at the lighthouse from the car window. 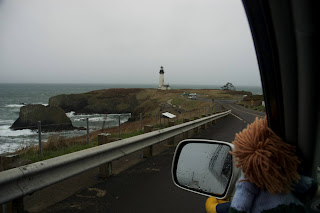 Tomorrow I head to the airport to fly to .  I hear the weather is warmer and sunny down there.  I enjoyed my visit to , but I am ready for some of that famous beach time.  Thanks Gene, I had a great time!  J