From Alaska I went south to Oregon and here's my journal entry:

DAY 1:
Alaska was beautiful, but I have to admit that all that snow and ice gets old, and the lack of daylight messed with my internal clock.  I’m really glad to be here on the coast of .  Wow!  It’s as pretty here as it is in , but it's a lot warmer.  My hosts at the Oregon Coast Aquarium have planned out a whole range of activities for me that will showcase a number of marine education opportunities in the area around .  If you check out a map of you will find right on the edge of the about halfway between to the north and to the south.

Gene, who's my host in Oregon, says that we'll not just visit the aquarium, but also the Oregon State University’s Hatfield Marine Science Center, the National Oceanographic and Atmospheric Administration (NOAA) ships that are now using Newport as their Pacific operations center, and we'll visit a 140 year old lighthouse that's still in service.  I’m excited, but I have to get some sleep before tomorrow’s busy schedule.

DAY 2:
The Monday morning volunteer meeting is famous for all the great food the volunteers bring in to go with their morning coffee. 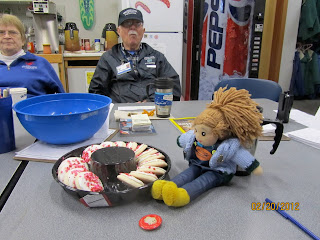 Harry and said it was a special occasion so I could have two treats.  I didn't want to make a pig of myself, so I just took one...don't these treats look yummy?!

Then said I should start my aquarium visit by coming with her to the aviary where five different kinds of coastal birds are guests of the aquarium all year round. 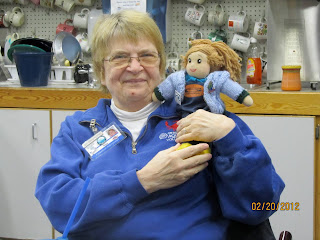 Oh boy!  Look at all those birds.  There are Tufted Puffins, Pigeon Guillemots, Common Murres, Rhinoceros Auklets, and even two Oystercatchers (remember the Oystercatchers Ed and I saw at the Two Oceans Aquarium in Cape Town?).
The Oystercatchers are really noisy birds, and Nan told me that they don’t like other Oystercatchers in their territory, so they can only keep two in the aviary.

Many people think that the murres look a lot like penguins, 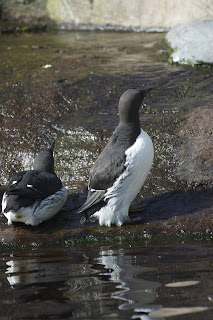 but I read the sign and it said that penguins live south of the Equator, and auks live to the north.  I had never heard of auks before, but here they were... so close I could almost reach out and touch them.  (The sign said I shouldn’t touch the birds, so I didn’t try). 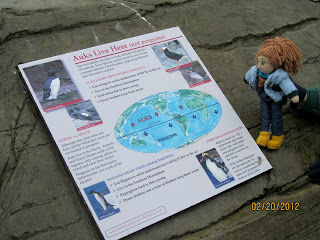 After we had seen all the birds it was time to feed the sea otters.  Gene took me over to the huge pool where up to four otters live.  There are only three otters in the pool now, but if an otter pup gets injured or orphaned, there is a home waiting for him at OCA.  I said “him” because all the otters living here are boys.  It turns out that if there was a girl otter here, the boys would all fight to be her friend, and that would not be good.

...here come the mammal specialists who feed and care for the otters. 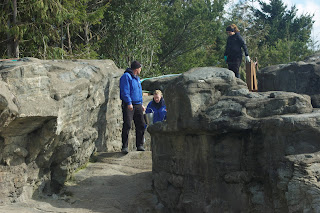 It’s a bit hard to see Aialik hiding behind his handler, but he is allowing her to check him out from nose to tail to make sure he is healthy. 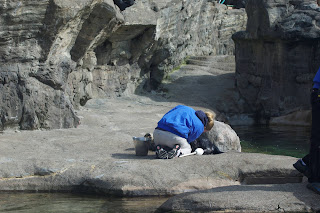 The otters each eat between 6.8 and 9.1 kg of high quality seafood every day!  They do not have blubber (fat layer) like the seals and whales do, so they have to burn food to stay warm in the cold water.  It costs almost $20 000 a year to feed each otter!!!  Imagine if your dog cost as much to feed?! 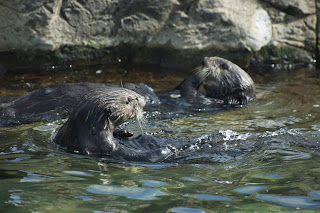 I also got to meet some really nice people at the Oregon Coast Aquarium.
After meeting the volunteers,  we went out to "Passages of the Deep".  This is the exhibit that replaced the huge pool where Keiko the Killer Whale lived (while he lived at the aquarium).  On our way into the exhibit we stopped by the shop for a sample of fudge...I couldn't resist, it was really good!

Inside the Passages of the Deep you can actually walk through the ocean with all the animals, including the sharks, swimming all around you.  I met a very nice family while I was watching the sharks, they seemed really like me...in fact the youngest girl wanted me to go home with her, but I told her I had more to see and other places to travel before I head back to my home in . 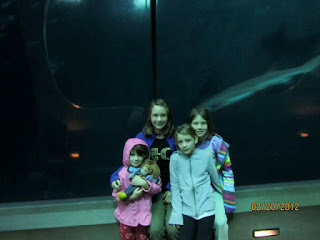 Tomorrow is my last day in and we are going to visit , NOAA, and the Yaquina Head Lighthouse.  I am going to get some sleep so I am ready for tomorrow.

I'll leave it at that for now Sea Fans...keep an eye on my blog, I'll post the next bit soon!
Have a great week Sea Fans!
Cheers
Abby
}( *)8